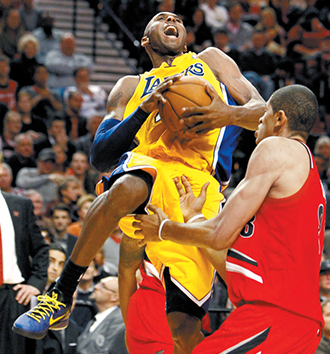 PORTLAND, Oregon - Dwight Howard’s 33 points and 14 rebounds were not enough for the Los Angeles Lakers in a 116-106 loss to the inspired Portland Trail Blazers on Wednesday night.

Nicolas Batum had 26 points and the Blazers led by as many as 19 in handing the Lakers their second straight loss to open the season. Damian Lillard, the sixth overall pick in the June draft, had 22 points and 11 assists in his NBA debut for Portland.

The Lakers’ troubles were compounded by the loss of guard Steve Nash to a bruised left leg late in the first half.

Nash, acquired by the Lakers this summer, collided with Lillard and limped to the locker room. Although the team initially reported he was fine, Nash struggled when he returned for the second half and left the game for good a short time later.

Kobe Bryant had 30 points for the Lakers.

The loss, as well as the injury to Nash, came a day after Los Angeles dropped its season opener at home 99-91 to the Dallas Mavericks, spoiling the Lakers debuts of both Howard and Nash. Howard had 19 points and 10 rebounds in his first game in gold.

It was apparent for the second night in a row that the Lakers were still getting used to each other. The starters rarely played together during an 0-8 preseason.

The Blazers wore new red uniforms for the opener and encouraged fans to wear red, but the crowd was nonetheless sprinkled with plenty of Lakers gold. Among them was a fan that lifted a sign reading, “I love Steve Nash.’’

Nash, a two-time NBA MVP, was acquired in a sign-and-trade with the Phoenix Suns this summer.

James Harden agreed to a big new contract extension - and he certainly looked worth it in his first game with the Houston Rockets.

Harden had 37 points and 12 assists in a stirring debut for his new team, and Carlos Delfino made four 3-pointers in the fourth quarter to lift the Rockets to a 105-96 victory over the Detroit Pistons on Wednesday night.

Detroit led 83-72 early in the fourth, but Harden and Delfino brought the Rockets back. Houston acquired Harden on Saturday night in a trade with Oklahoma City and agreed Wednesday on a five-year, $80 million contract extension with him.