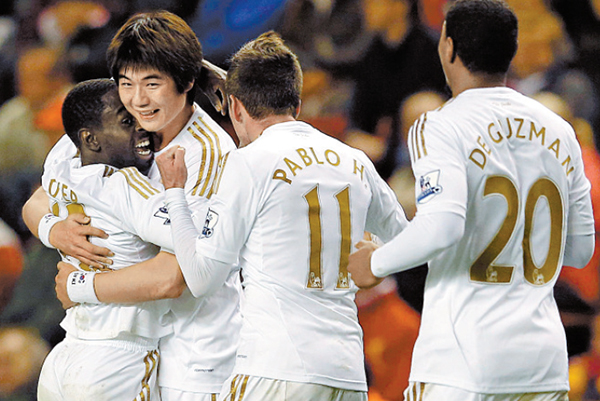 Swansea’s Nathan Dyer, left, celebrates his goal against Liverpool with Ki Sungyeung, second from left, during their English League Cup match at Anfield in Liverpool, northern England, Wednesday. Swansea won 3-1 and reached to the quarterfinal. [REUTERS/YONHAP]


LONDON - Liverpool boss Brendan Rodgers was humbled by former club Swansea City as the Welsh side won 3-1 away to knock out the holders in the English League Cup last 16 on Wednesday.

Chico grabbed the opener for Swansea in the 34th minute as Liverpool played a much changed side in the often maligned second English cup competition.

The weakened hosts went 2-0 down midway through the second half through Nathan Dyer before substitute Luis Suarez pulled one back and Jonathan de Guzman sealed Swansea’s first-ever League Cup quarterfinal spot late on.

Swansea has the luxury of a home clash against second-tier Middlesbrough in the last eight following Wednesday’s draw.

Another high-scoring thriller ensued at Stamford Bridge although both Alex Ferguson and Roberto Di Matteo elected to send out vastly different teams in the often maligned secondary cup competition.

Chelsea came from behind three times to beat Manchester United 5-4 after extra time and book a spot in the League Cup quarterfinals on Wednesday, earning revenge for Sunday’s controversial 3-2 league defeat.

United netted first through Ryan Giggs before David Luiz scored for Chelsea from the penalty spot.

Javier Hernandez took the lead back for United after another defensive mistake, before defender Gary Cahill again levelled matters on 52 minutes.

United again went in front just before the hour mark thanks to Nani’s cool chip, but another penalty, this time from substitute Eden Hazard, sent the match into extra time.

Daniel Sturridge, who had missed a host of chances throughout, nabbed Chelsea’s fourth by latching onto a poor backpass and there was even time for a Ramires goal and a Giggs penalty.

Norwich City will also be in the last eight after coming from behind to beat Tottenham Hotspur 2-1 at home.

“All we needed to do was see the game out and keep possession. I think the young players started to feel it,” Ferguson told Sky Sports.

“We had control of the game. If you are leading 3-2 in the final seconds of the game you really should see it out.”