Time for candidates to get a reality check

Time for candidates to get a reality check 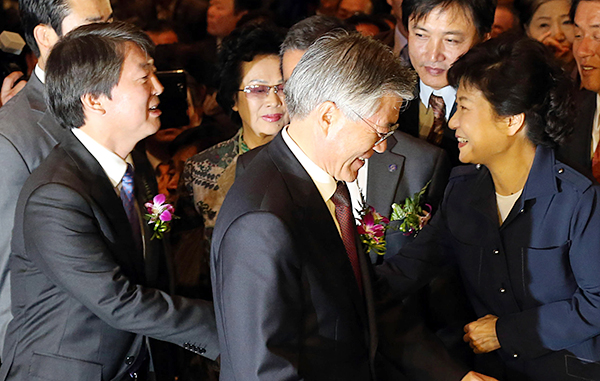 It is an undeniable reality that life is getting harder and harder. It is much harder to get into a college of your choice now compared to 25 years ago, when I entered college. It is even harder to get a job now than when I found my job as a newspaper reporter 19 years ago. Young people cannot shake a sense of uncertainty and constantly doubt that tomorrow will be any better than today.

At this juncture, we are about to vote for a new president. Each of the three leading candidates - Park Geun-hye, Moon Jae-in and Ahn Cheol-soo - claims that he or she is the right person to be in charge during these times. They have made their promises, and the time has come for voters to thoroughly consider whose words to trust.

Mr. L., a man in his 60s with ample experience in public service and business, said voters will determine the next president based on “feasible hopes.” He ruled out candidates who cannot give hope to anyone other than themselves and will pick someone whose proposals are realistic and attainable - not some distant rosy future. Mr. L. believes the next president and administration will face very difficult challenges at home and abroad. “No matter who becomes president, it won’t be easy. So I am waiting for a candidate who can say, ‘Frankly, it is not very easy to completely resolve youth unemployment or the polarization issue in a five-year term, even if I am elected president. I won’t be able to fulfill such expectations. But I will do my best to use human and material resources in the right places at the right times to start heading in the right direction.’ Then I will cast my vote for that candidate,” he said. The 10 campaign promises of each candidate can be viewed on the National Election Commission Web site.

College student K said he would vote for a candidate who restores “a sense of civic duty.” He referred to the Swiss example discussed by Michael Sandel, a Harvard University professor and author of “Justice,” at a June lecture in Seoul. Switzerland needed to build a nuclear waste repository, a facility no one wanted to live near. Research showed that a small mountain village would be the safest place. Residents were asked if they would take the nuclear site if the village were found to be the safest place, and 51 percent responded they would accept it. But when asked if they would accept it if they were offered 6,000 euros ($7,775) per person every year, only 25 percent approved the offer. The residents felt a sense of civic duty to make a sacrifice in the public interest, but when offered money, they felt disappointed and thought their sacrifice had turned into a business deal.

“I will vote for someone who can proudly ask people to share the burden,” K explained.

* The author is a deputy political and international news editor of the JoongAng Ilbo.