DUP leadership urged to quit in name of reform

DUP leadership urged to quit in name of reform 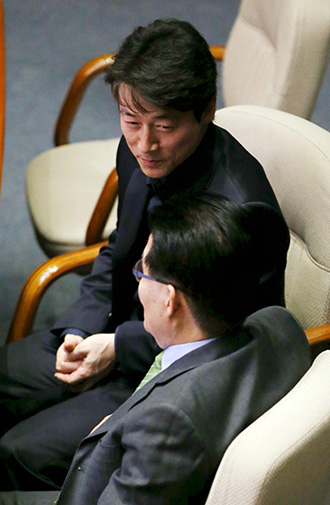 With less than seven weeks before the presidential election, turmoil erupted at the top of the largest opposition party after a senior leader stepped down yesterday to try and force the chairman and floor leader to follow suit. Representative Kim Han-gill yesterday announced his decision to step down from the Supreme Council and urged the leadership to do so as well to show voters a spirit of reform within the party.

“Since our presidential candidate Moon Jae-in promised to do away with politics controlled by vested interests inside the DUP, it is desirable for the current leadership to give up all vested rights and resign to help his reform drive,” Kim said. “I will be the first to do so. I want to plant the seed for Moon’s presidential victory.”

Kim said it has been five months since the leadership of the DUP was formed and no reform has followed.

“I was a member of the leadership and I share the responsibility,” he said. Kim said that since Moon was given exclusive authority over the party as presidential candidate, there won’t be a leadership vacuum in the DUP if its leaders resign.

While Roh loyalists in the Moon campaign resigned from their positions last month in a symbol of political reform, Lee kept his chairmanship and Park the floor leadership.

The political reform committee of the Moon campaign reached a decision Wednesday night that the current leadership must resign. Kim Han-gill, who resigned yesterday from the Supreme Council, came in second in the race for party chairmanship. It remains to be seen if Moon will accept growing demands to sack Lee and Park. The DUP presidential candidate yesterday reacted reluctantly to the idea.

“Lee and Park didn’t participate in my campaign, and the entire authority of the Supreme Council was handed over to me already,” Moon said. “If fact, they are no longer on the frontline of politics. I don’t think they are derailing my campaign in any way.”

Lee and Park resisted yesterday the pressures to quit.

A dramatic gesture to demonstrate the DUP’s embrace of political reform has been discussed inside the party for a while. It is also important as negotiations with Ahn Cheol-soo, the independent liberal presidential candidate, draw near. Ahn and Moon have to decide how to merge their campaigns and pick one candidate to run against the conservative Saenuri Party’s Park Geun-hye. Ahn has said reform of the DUP is a precondition for the negotiations.