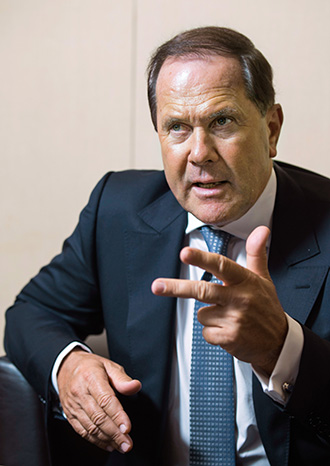 The Ryugyong Hotel, the 105-story pyramid in Pyongyang that has been empty and incomplete for decades, will be run by a respectable Swiss hotel chain and opened next summer.

Reto Wittwer, president and CEO of Kempinski Hotels & Resorts, said in an exclusive interview with the JoongAng Ilbo Wednesday that his company will “open the hotel in July or August 2013 with 150 rooms at the top floors of the building.”

In 1987, the Pyongyang regime announced a plan to construct the 105-story building, which would have been the tallest hotel in the world, with skills and capital from a French construction company. The regime spent more than $400 million on the project until it was suspended in 1992 only 60 percent completed.

In 2008, Orascom, the Egyptian telecommunications company, decided to invest in the project and resumed construction. Orascom has invested $180 million in the exteriors of the building, Wittwer said. In 2011, all of the exterior construction was completed, and Orascom is working on the interior.

Wittwer visited South Korea on Tuesday to attend an announcement by the Incheon Metropolitan Government of a multipurpose tourist complex. Wittwer is one of the major investors in Incheon’s project.

He said a South Korean spy once told him that the Seoul government would also invest money in the hotel, about $500 million, but in Wittwer’s name. He said he arranged a meeting between the two Koreas but they couldn’t reach an agreement on that intriguing plan.

Established in 1987, Kempinski Hotels & Resorts runs 128 five-star hotels in 39 countries, including the Kempinski Hotel Mall of the Emirates in Dubai, United Arab Emirates.


Q. Why did you take over operation of the Ryugyong Hotel?

A. Ri Chol, who was a North Korean ambassador to Switzerland for 18 years and aided the leader Kim Jong-un’s studies there, asked me three years ago if I wanted to run the hotel. I said I was a bit interested, and he arranged a meeting with Samih Sawiris, CEO of Orascom, in Cairo. 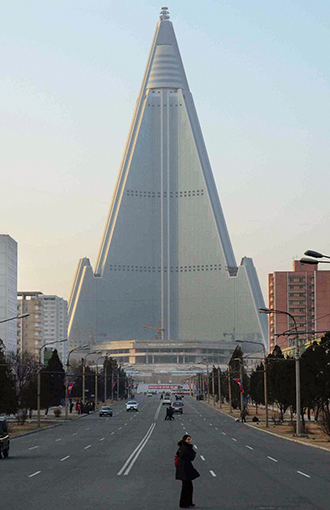 A photo of the Ryugyong Hotel, a 105-story pyramid in Pyongyang, taken in February 2011. [YONHAP]

Why did you and Orascom get interested in the hotel?

I think an American company can’t run this hotel. But someday, North Korea will open its economy. I thought that under the Kim Jong-un leadership, it would take less time for the regime to open up to the outside world.

Orascom had a large-scale interest [in the hotel project] in an aim to monopolize all businesses related to telecommunications in North Korea. Its investment in the hotel is just a small present to the regime.


How will the hotel look when completed?

It will become a multipurpose complex, with the three lowest floors used for the lobby, restaurants and a shopping center, and the rest of the upper floors will be mostly used for offices. The hotel will be located on the top floors leading to the pyramid-looking crown of the building. There will be some vacant floors between the hotel and the commercial space, which I will determine what to do with later.

Recently, sources said Orascom suspended construction due to financial difficulties. Is this true?

It’s a totally groundless rumor. Orascom is recording an annual profit of about $15 billion. It’s impossible that they don’t have sufficient money.

Still, we have some problems in setting up base transceiver stations [near the hotel] due to the heavy security by North Korean authorities. Orascom is actually using the hotel as leverage to pressure the regime [to allow them to build the stations]. I heard North Korea is reportedly the world’s second-largest supplier of rare earth metals, and Orascom has obtained the right to extract them.

Some sources say that the hotel doesn’t have high-speed elevators because of economic sanctions imposed by Western countries. Is that correct?

In fact, we have problems with the elevators. Those located on the left and right sides of the building are fine, but the one at the center, which is supposed to go up to the middle floors, can’t operate because the shaft is curved a bit. The cause of that was a mistake by Schindler, a Swiss elevator manufacturer.