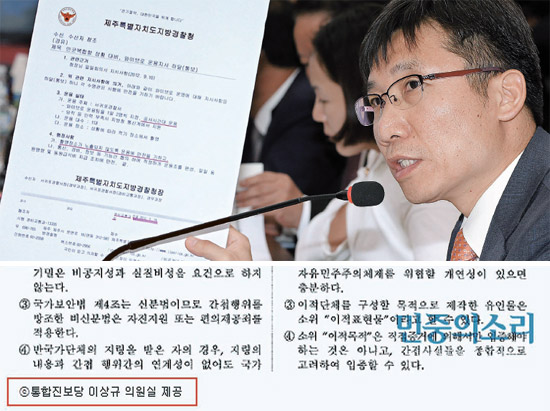 Lee Sang-kyu, a Unified Progressive Party lawmaker known as a member of the pro-Pyongyang faction, asked police for a list of the names of policemen who are in charge of cracking down on pro-North activists in the South.

According to the Seoul Metropolitan Police Agency, Lee, as a member of the National Assembly’s Public Administration and Security Committee, asked the agency to provide him with the list of 176 security policemen who took a state-run test on the National Security Law this year as well as information about their positions and test scores.

“The duty of security policemen is special, such as investigating spies and suspects who violate the National Security Law or collecting information regarding North Korean affairs,” an official at the agency told the JoongAng Ilbo. “So it’s basically restricted to release their personal information.”

According to the agency, it was unprecedented for an incumbent lawmaker to ask for such information on security policemen.

The official said that they deliberated on whether to give out the information that Lee asked. They finally determined to offer information on only the surnames, positions and test scores of the policemen.

The 47-year-old Lee won a geographic seat in the Gwanak District, southwestern Seoul, after the UPP’s former chairwoman Lee Jung-hee, who was running in the district, gave up her candidacy taking responsibility for an allegation that she had rigged opinion polls to win her candidacy. Lee, who was a close aide to her, became the candidate in the district and won in the April 11 legislative election.

Lee came under fire after he appeared on a televised debate program in May, when he was ambiguous on a question about North Korea’s nuclear weapons program, the leader Kim Jong-un and so-called “pro-Pyongyang activists” in the South. At the time, Lee said asking those questions were an act of “witch-hunting.”

In this sense, concerns still remain among the police as to why Lee called for such information.

“You know, we were worried about the purpose of Lee’s demand, because the UPP had been embroiled in the primary rigging scandal and criticized with its pro-Pyongyang stance,” another police official said.

But Lee told the JoongAng Ilbo that he needed the information for a legislative audit.

Asked why he called for the names of policemen, Lee said he didn’t specifically ask for the names, but his aide made a request for them.

However, Lee didn’t use the information in the legislative audit held on Oct. 15. He didn’t say a single word about the Seoul security police in the audit.