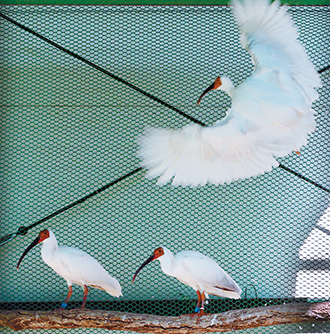 Three ibis born this year as part of a project to revive the species in the country enjoy their day at the ibis restoration center in Changnyeong County, South Gyeongsang. Designated as Natural Monument No. 198 and last seen near the inter-Korean border village of Panmunjom in 1978, two ibises, one male and female, were adopted from China in 2008 to restore the species in the country, whose number now reaches 19. [YONHAP]