For 4th time in 8 years, Lions are the kings

For 4th time in 8 years, Lions are the kings 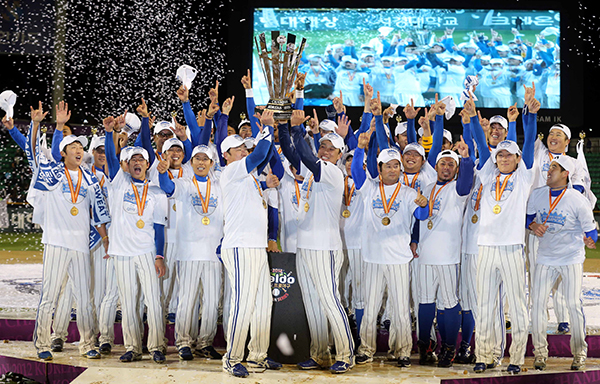 Samgsung Lions players raise the Korean Series trophy after beating the SK Wyverns 7-0 in Game 6 at Jamsil Baseball Stadium in Seoul on Thursday. Lee Seung-yeop, nicknamed the “Lion King,” was named the MVP of the series. [YONHAP]


When Ryu Joong-il led the Samsung Lions to the Korean Baseball Organization title during his first year as manager in 2011, some pundits credited the run to his predecessor, Sun Dong-yul, saying the winning formula was already in place.

But with another spectacular season ending with the franchise’s sixth Korean Series title, there is little doubt that Ryu has played a major role in the Lions’ dominance.

After the 7-0 rout over the SK Wyverns in Game 6 on Thursday, Samsung has now played in eight of the last 12 Korean Series and won the championship five times. Only the Kia Tigers have more titles with 10.

Lee Seung-yeop hit a three-run triple, Park Seok-min added a two-run homer and starting pitcher Jang Won-sam shut-out seven innings in Seoul on Thursday to seal the Lion’s 4-2 series win over the SK Wyverns, who fell short in the 2011 series as well.

“People said last year that an easy victory was possible because of the foundation set by Sun,” Ryu said after winning the Korean Series on Thursday, according to My Daily, a local media outlet.

Ryu, 49, is on path to cement his name as one of the KBO greats. A third straight title next year would place him next to legendary Kim Euong-yong of the Tigers as the only managers to three-peat.

Kim, who recently returned to the dugout as the Hanwha Eagles manager, won four straight titles between 1986 and 1989.

Ryu will also manage Team Korea during the upcoming World Baseball Classic in March, tasked with leading the team to the semifinals of the tournament for a third straight time.

The Korea Baseball Organization yesterday confirmed Ryu as Korea’s manager for the third WBC in accordance with the internal guidelines that the manager of the Korean Series winner takes the helm.

Ryu said he hopes to lead Korea to its first-ever WBC championship.

The Lions now head to the Asia Series to be held from Thursday to Sunday at Sajik Stadium in Busan. The Lamigo Monkeys from Taiwan, Perth Heat from Australia and China Stars from China have been confirmed to play in the series as the winners of their respective domestic leagues.

The winner of the ongoing Japan Series between the Yomiuri Giants and Nippon Ham Fighters will represent Japan. The Lotte Giants will also play in the series as the hosts of the tournament.

If the Lions win, they will become the first team to win back-to-back titles at in series. It began in 2005.

The Lions beat the SoftBank Hawks of Japan 5-3 in last year’s finals, becoming the first KBO club to win the title.

“We will take a break for two days or so and then train for four days before the games start,” Ryu said.

This season started slowly for the defending champs. The Lions opened the first month with seven wins against 10 losses, which put them in sixth place. They recovered with a 14-11 record in May but remained in second-to-last place in the standings. They turned the tide in June with a 15-9 run and jumped to fourth. The Lions sprang to the top of the standings in early July and let it slip for one day, July 7, to the Lotte Giants, but quickly regained the lead and held on.

Directly reaching the Korean Series as the regular season winner, they took a three-week break before the series against the Wyverns started.

Lee Seung-yeop, nicknamed the “Lion King” and arguably one of the best hitters in KBO history, was named the MVP of the Korean Series thanks to his stellar performance in the final game. He smacked a three-run triple in the fourth inning to seal the victory.

Lee garnered 47 out of 71 votes from the KBO press corps. Lions ace Jang, who allowed only one hit while striking out nine on Thursday, received 10 votes. Jang was chosen as the MVP of Game 6.

“It was the most precious year for me,” Lee said. It was his first Korean Series MVP, although he also won the title in 2002. He came back to the Lions for the season after a five-year stint in Japan.

Lead-hitter Bae Young-seop created several scoring chances for the Lions as he went 3-for-5 in the game. “Express reliever” Oh Seung-hwan shut out the ninth but did not record a save due to the Lions’ seven-point lead.

The Wyverns only recorded two hits in the game including Choi Jeong’s double in the fourth inning.

The KBO also hit a home run in postseason sales. It recorded 10.39 billion won ($9.5 million) in ticket sales from a total of 15 postseason games, the first time it has surpassed 10 billion won. A total of 26,000 seats at Jamsil Stadium were sold out on Thursday, extending the sell-out streak during the Korean Series to 31 since the record started with the third game of the 2007 series between the Wyverns and the Bears.