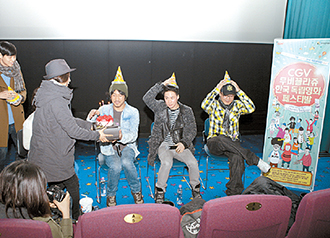 The cast of the 2009 indie film “Breathless” directed by Yang Ik-joon attend a question and answer session with audience members during a screening of the film at a CGV Movie Collage theater. Provided by CGV

The CGV Movie COLLAGE is indie film theaters that CJ CGV, the largest multiplex cinema chain in Korea, has run since 2004 to diversify its commercial-film-focused portfolios. There were three such theaters by the company in 2004, but it has grown to 9 including one in Busan one in Bundang, Gyeonggi, and one in Incheon.

The Movie COLLAGE theaters don’t have separate buildings, but are within the existing CGV multiplex. In Seoul, they are in Apgujeong-dong, Gangbyeon, Sangam-dong, Guro and Daehangno.

It has also run several programs to enage the audiences with the film directors of other film people including the MovieCOLLAGE Audience Programmer, in which audiences can participate in programming of the films to be screened at the MovieCOLLAGE theaters.

Not just independent films have been brought to the theaters, though. Some films made in less known countries or by indie-tilted directors also screened for what the company said is for the purpose of diversification. “Midnight in Paris,” a 2011 film directed by Woody Allen, was also screened at the theaters this year.

“The MovieCOLLAGE was born for expanding the base of variety of movies and nurturing new talents in the film industry,” said Kang Ki-myung, an official of the CGV. “We will put our focus on programs different from others making the maximum use of the proximity of the multiplexes.”