Trouble in the Unification Ministry

Trouble in the Unification Ministry 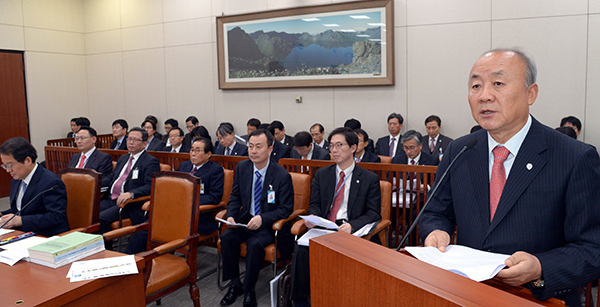 Five years ago, the Unification Ministry was nearly shut down by the presidential transition committee. The executives who were actively involved in the “Sunshine Policy” during the Kim Dae-joong and Roh Moo-hyun administrations were released from duty overnight. Director Jo Myeong-gyun, who had attended the inter-Korean summit meeting between President Roh Moo-hyun and North Korean leader Kim Jong-il in October 2007, was dispatched to serve at the Blue House at the time, and he was made into an example.

The Ministry of Unification and its officials were saved thanks to the opposition party, but it was not easy for them to devote themselves to the North Korean and unification policies of the Lee Myung-bak administration. They were on duty, but things were very different. The midlevel executives were used to the active execution of the “Sunshine Policy” from the early days of the Kim Dae-joong administration, arranging the summit meeting, inter-Korean exchanges and talks. They did not welcome the stalemate and were unable to hold a proper meeting.

The Unification Ministry reached a consensus that the ministry and its North Korean policy would not get swept up by politics. However, the ministry cannot be free from politics as the North Korean policy direction and the NLL controversies have become the focus of the presidential campaign. Those who served as unification minister during the Roh Moo-hyun administration joined the campaign camps one after another. As they declared their intention to bring back the “Sunshine Policy,” ministry officials are nervous about how it will affect them. One said, “Except for one or two, the ministers during the Kim and Roh administrations were not so loyal.” They cared more about their personal gain than the organization.

*The author is a deputy political and international news editor of the JoongAng Ilbo.
By Lee Young-jong