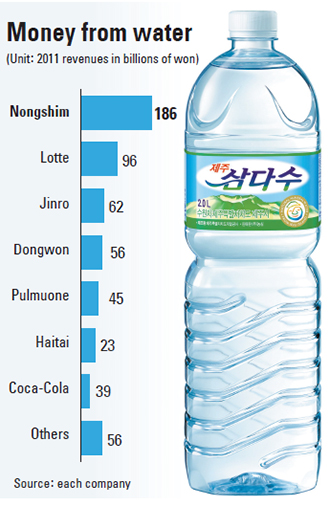 First the safety of its instant ramen was questioned. And yesterday, it lost its contract as the distributor of Jeju Samdasoo, the best-selling bottled water in the country. Even Samsung Electronics Chairman Lee Kun-hee is a fan of that brand of water.

The Jeju Province Development Corporation (JPDC) said yesterday that Nongshim’s contract with Jeju Samdasoo will end on Dec. 14, according to a judgment by the Korean Commercial Arbitration Board.

The JPDC and Nongshim have been in legal clash over their business relationship since the end of last year.

The public corporation wanted to name Kwang Dong Pharmaceutical as its new distributor, and Nongshim sued.

Nongshim has distributed Jeju Samdasoo since 1998.

Industry insiders project that the lost sales of the most popular bottled water brand on top of the recall of Nongshim ramen products are expected to land a significant blow on the company’s sales.

Jeju Samdasoo accounted for 77 percent of the total sales of Nongshim’s beverage products.

Nongshim said it will accept the decision of the arbitration board and start a new bottled water business importing mineral water from Baekdu Mountain on the border between North Korea and China.

“The new bottled water product is being sold in China under the brand name Baeksansoo,” said Yoon Sung-hak, spokesperson for Nongshim. “The company is preparing to release the new product in the domestic market as early as next month.” Nongshim’s Chinese corporation is currently selling the product.

The company said it built a production plant in China’s Jilin Province in 2010.

Last week, Nongshim’s Neoguri ramen and other ramen products were subject to recalls by the Korea Food and Drug Administration and were removed from shelves in Taiwan, Japan and China after the cancer-causing substance benzopyrene was found in soup powder.