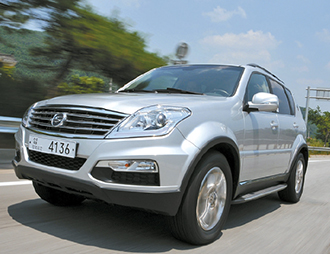 For many Koreans, Ssangyong Motor is thought of as one of the least glamorous car brands, after going through multiple owners (Ssangyong, Daewoo, Shanghai and Mahindra), court receivership and strikes.

However, despite those unfortunate incidents, there’s also one image that Ssangyong manages to continue to this day: The top manufacturer of sport utility vehicles.

While the success of Musso and Korando laid the foundation for the company’s image, Rexton has cemented Ssangyong as a power player when it comes to four-wheel drive SUVs.

When Rexton was first released in 2001, the company promoted it with the eye-catching slogan “Korea’s 1%,” promoting the premium SUV’s luxury features and powerful performance.

The Rexton W, which was first introduced in May, maintains that tradition and identity, but puts a little spin on it. Ssangyong says the “W” signifies “work of art.” 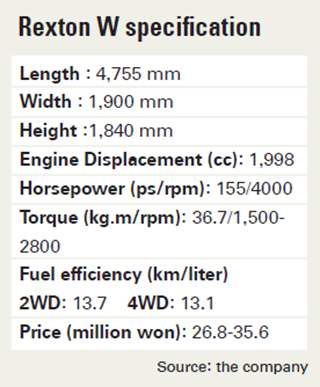 Would you seriously call this car a “work of art?” I think the “W” might actually stand for “well-made.”

At the onset, the biggest weapon of the Rexton W is the price.

The first generation of Rexton had a price tag of more than 40 million won ($36,651), but the latest version is cheaper than that. Rexton W’s base model, RX5 Deluxe, starts from 27.3 million won, while Noblesse, the high-end model, costs 36.3 million won.

The first impression of the car’s design could be more uplifting, as it is merely a face-lift of the Rexton II, the second generation which was released in 2006. However, it still offers ample charm with its widened front grill and revamped headlights, which Ssangyong says were inspired by the eyes of an eagle.

The exterior was acceptable considering Ssangyong’s clumsy touches in the past. The shiny 18-inch alloy wheels with the Noblesse model, the high-end Rexton model which I drove, caught my eye.

Once I looked inside the vehicle, I was speechless, but not in a good way. The dashboard of this new Rexton is a combination of dark, wood panels and silver trim, but that’s not special compared to other premium SUVs.

The biggest shock came when I looked at the gauges. While others might say it gives off a “beauty of simplicity,” it was too old-fashioned for me, with a green color cluster that wasn’t even full-on LCD.

Just looking at the speedometer I was confused as to whether I was driving the latest Rexton model or my 2002 Hyundai Santa Fe.

The location of the navigation screen was also a flop. Since it was positioned below the front air vent, it was nigh impossible to see.

After four days of test driving, I found several more uncomfortable things regarding interior design: The air conditioner buttons were a bit small to operate, the cup holder was also too small to accommodate large cans and the console lacked space for wallets or phones.

For Ssangyong lovers, however, all those mistakes can be forgiven after pushing the start button and taking hold of the steering wheel.

Female drivers, who might be intimidated by the size of the car before driving, can easily handle the steering wheel with one hand, thanks to the Speed Sensitive Power Steering technology that automatically controls the resistance of the steering wheel depending on the speed.

The new Rexton has less engine displacement than its previous edition, but its maximum horsepower and torque are better. The 2.0-liter e-XDi200 LET diesel engine produces 155 horsepower with 36.7 kilograms per meter torque, a 15-percent upgrade from the previous 2.9 liter engine.

As a result, its performance at low rpms (1,500-2,800) is impressive. Despite the vehicle weighing nearly 2 tons, it accelerates with power. The E-Tronic five-speed automatic transmission from Mercedes-Benz also switches gears smoothly.

If you need speed, Rexton W can probably reach 180 kilometers per hour (112 miles per hour), but it would be tough to get the needle to that number unless you really stomped on the gas pedal.

For many previous Rexton drivers, they will also find that the new model has improved its Noise Vibration Harshness over previous models.

For Rexton W, Ssangyong engineers used Decoupling Technology to reduce so-called “booming noise” in the mid- or high-speed zone and also maximized the Chain Drive System Layout to reduce engine noise. In addition, the double-wishbone suspension in the front and multi-link suspension in the rear provides more stability.