The Ministry of Justice yesterday started the process of extraditing Liu Qiang, the 38-year-old Chinese man who was convicted earlier this year of throwing firebombs at the Japanese Embassy in Seoul, to Japan.

The ministry asked the Seoul High Court to judge whether Liu should be extradited after he is released from jail next Tuesday after serving 10 months. That is the first step in the extradition process.

The Justice Ministry had been weighing whether to send Liu to Japan, where he is wanted for setting fire to the Yasukuni Shrine in Tokyo in December, or to send him to China. 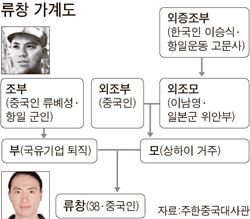 China has officially asked Korea to consider Liu a political prisoner - that his crimes were a political reaction to Japan’s misdeeds - and to send him home on humanitarian grounds. Tokyo asked Seoul to extradite him to Japan based on a bilateral treaty the two countries have regarding prisoners.

“After reviewing relevant laws in regards to the incident from various angles, we have come to a conclusion that conditions have been met for us to start the process of extraditing Liu,” the ministry said in a statement yesterday.

Following the ministry’s decision, Seoul prosecutors yesterday requested a warrant to arrest Liu. If the warrant is issued, prosecutors will request that the court evaluate Liu’s extradition. The judge will then make a ruling. If the court decides to extradite Liu, the Justice Ministry will then notify Japanese law enforcement authorities.

Liu received a 10-month jail term earlier this year for throwing four Molotov cocktails at the Japanese Embassy, which he said was an act of protest against Tokyo’s refusal to apologize for its wartime crimes.

He also confessed in January that he lit a fire at the Yasukuni Shrine in Tokyo last December, causing minor damage.

An official from the Japanese Embassy in Seoul told the JoongAng Ilbo yesterday, “Based on Japanese criminal law, an arsonist is given more than five years of imprisonment or can even be imprisoned for life or receive the death penalty depending on the gravity of the crime.” The official said, “Setting a fire in Japan is considered a serious criminal offense.”

Liu has said that he lit fire to the Yasukuni Shrine because he was dissatisfied with Japanese Prime Minister Yoshihiko Noda’s passive attitude toward Korea’s so-called “comfort women,” or wartime sex slaves, during a Korea-Japan summit last December.

On Jan. 7, Liu visited the Seodaemun Prison History Hall in central Seoul. On the following day, he threw firebombs at the Japanese Embassy and was arrested. He told the Seoul police that his maternal great-grandfather was also a Korean who was tortured at the prison hall after being caught for fighting for independence against Japan in the 1930s. Liu said his great-grandfather died from the torture.

According to the Chinese Embassy in Seoul, Liu’s fraternal grandfather was a Chinese soldier who also resisted Japanese rule in China and was killed in a battle in 1945.