Baseball is beloved by fans, but you wouldn’t know that by its stadiums

Baseball is beloved by fans, but you wouldn’t know that by its stadiums 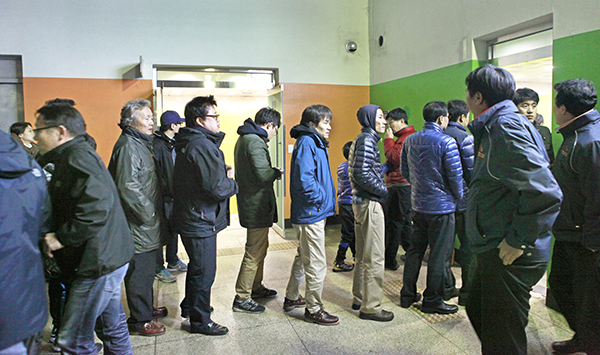 Fans wait outside a restroom at Jamsil Baseball Stadium after the sixth inning of Game 6 of the Korean Series between the Samsung Lions and SK Wyverns on Thursday. By Park Sang-moon


At 3 p.m. on Thursday afternoon, Jamsil Stadium was already crowded with fervent baseball fans gathered to watch Game 6 of the Korean Series, the final round of the 2012 KBO postseason, between the Samsung Lions and SK Wyverns.

Fans wore their favorite player’s uniforms and beat thunder sticks. People without tickets sought out scalpers in stairwells of the Sports Complex Station of line No. 2, the station for the ballpark, though police officers and subway sheriffs are cracking down on illegal ticket sales.

This is the scene every year at Jamsil Baseball Stadium. On Thursday night, the 2012 Korean Baseball Organization season ended with the Lions defeating the rival Wyverns, ending the series 4-2. It was a successful year as it attracted more than seven million fans for the first time in the history. During the 15 postseason games, the league earned 10.3 billion won ($9.45 million) from ticket sales. It is the first time the league has earned more than 10 billion won from ticket sales, according to the KBO. Last year’s revenue was 7.86 billion won.

Despite the popularity of baseball, fans had to battle with poor conditions at the stadium in order to enjoy the country’s most popular sport. Some fans had to give extra money to scalpers, who purchased dozens of tickets in advance, and had to deal with poor stadium facilities, seats and restrooms that have not been managed efficiently for years.

The level of Korean baseball has advanced significantly. It has produced some great achievements in international events such as the 2009 World Baseball Classic, in which Korea finished second, and the 2008 Beijing Olympics in which Korea earned a gold medal. But there is one thing that has not changed much - Jamsil Stadium has consistently been under the care of the Seoul Metropolitan Government.

The stadium, constructed by Hyundai Engineering and Construction in 1982 at a cost of 12.6 billion won, is a golden goose that generates billions of won in revenue every year. Currently, two of the three Seoul-based teams, the LG Twins and Doosan Bears, call Jamsil Stadium their home.

According to the city government, it has earned about 10 billion won in revenue from the ballpark this year. The city received 2.56 billion won from the two Seoul teams in rental fees and also generated 7.22 billion won this year by selling advertisements in the stadium. The rental fee was increased by more than 80 percent from last year’s 1.38 billion won.

The city government last year received 2.45 billion won from the two Seoul teams by selling advertising, which includes banner and electronic display ads. But it has adopted a bidding system to sell advertising for the first time this year as the popularity of baseball has grown. It was able to sell licensing rights for 7.22 billion won to Jeonhong, an agency that specializes in outdoor advertisements. The two home teams were excluded from the bidding.

“It means [the city government] only spends money on facilities or fixtures that can’t be used anymore unless they are repaired or improved,” said an official with the Seoul Doosan Bears, who requested anonymity.

The facilities that fans mostly complain about are seats, restrooms and expensive prices inside the stadium.

“The basic design for seats in every baseball stadium in the country didn’t consider that fans would generally spend more than three hours seated for a game,” said Heo Koo-youn, a baseball analyst. “Seats in some baseball stadiums in advanced countries such as the U.S. are installed at better angles so fans can see the pitching better.”

Narrow spaces in the aisles and between the seats are also problems. When the Korea JoongAng Daily visited the seating area in the outfield, many narrow aisles were occupied by standing ticket holders.

“I don’t know why the KBO is selling standing tickets at an event that attracts many people,” said a 37-year-old fan named Shin Hong-il, who almost spilled his beer and chicken nuggets on a standing ticket holder who was sitting on the stairs during the final game. “I see no one from the stadium managing these people.”

“I tend to remain in my seat because the aisles between seats are too narrow,” complained Kim Yeon-seo, another fan. “It is inconvenient for other fans whenever I get up from my seat.”

“We have been regularly repairing broken seats,” said Song Doo-seok, the director of the office of the Seoul physical plant management under the Seoul Metropolitan Government.

“But it is impossible to widen aisles or change the views from seats unless we build a new ballpark. We are considering investing 50 billion won to improve the Jamsil and Mokdong baseball stadiums by 2015.”

The report said that Munhak Stadium in Incheon, the home of the SK Wyverns, has the best restroom conditions in the country as it has 76 restrooms for 27,600 fans. The Daegu Baseball Stadium was reported as the worst, with only 17 restrooms for 13,000 fans. The Daegu stadium opened in 1948 and remains one of the league’s most decrepit ballparks.

“They have provided nursing rooms in restrooms, but it smells like mold,” said Shin Ji-won, a 42-year-old fan from Guui-dong in eastern Seoul.

“I heard that the number of female fans has been increasing recently but it is hard to find improvements for a woman like me.”

Instead of investing in repairs and maintenance, the city government has decided to build a brand new baseball stadium in the capital city.

In 2009, it began building the Gocheok Dome, the first dome-type baseball stadium in the country, by investing 220 billion won in a 57,261-square-meter area of Gocheok-dong in Guro District, southwestern Seoul.

It is able to accommodate 22,258 fans, and many entertainment amenities, including a swimming pool, will be built by the end of the next year.

But this brand new fancy baseball dome has failed to attract Seoul baseball teams as it is located on the outskirts of the capital city.

It’s not only fans who must endure this stadium. Every visiting team must change their uniforms and keep their equipment in hallways because no clubhouse or locker rooms are provided for them.

“People in other countries wouldn’t believe that Korea won the gold medal at the Beijing Olympics if they saw the infrastructure of Korean baseball stadiums,” Park Seok-min, the third baseman for the Samsung Lions, told the Korea JoongAng Daily.

“The city government must consider Jamsil Stadium as a public venue more seriously because it is a place where tens of thousands of citizens visit every day,” said Heo Koo-youn, a baseball analyst for MBC Sports.