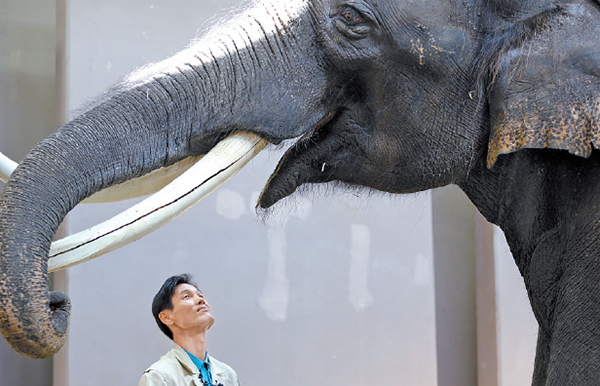 
A respected scientific journal has concluded that Koshik, a 22-year-old elephant at the Everland Zoo in Yongin, Gyeonggi, can mimic a handful of Korean phrases.

In an article published yesterday on the Web site of Current Biology under the title “An Asian Elephant Imitates Human Speech,” researchers said that Koshik can mimic five Korean phrases: “hello,” “sit down,” “no,” “lie down” and “good.”

Trainers of the 5.5-ton elephant, who was born at the Seoul Zoo in Gwacheon, Gyeonggi, claim he can also say “foot.”

“To create these very accurate imitations of speech formant frequencies, this elephant places his trunk inside his mouth, modulating the shape of the vocal tract during controlled phonation,” wrote the research team led by Angela Stoeger of the University of Vienna and Daniel Mietchen of the University of Jena in Germany.

“This represents a wholly novel method of vocal production and formant control in this or any other species,” they wrote.

The researchers suggested that Koshik may imitate phrases because he wants to befriend humans.

“The social circumstances under which Koshik’s speech imitations developed suggest that one function of vocal learning might be to cement social bonds and, in unusual cases, social bonds across species,” the paper said.

Koshik was born in 1990 and moved to Everland in 1993. Two female elephants accompanied him until he turned five, but from 1995 to 2002, he was the only elephant at the zoo. During that time, he was trained to obey several commands and exposed to Korean by trainers, veterinarians, guides and tourists.

The paper said trainers noticed Koshik’s imitations of human speech for the first time in August 2004, but it was not clear if he started the behavior at that time or if the trainers simply didn’t notice it until then.

The researchers noted that living without other elephants and having intense social contact with humans during an important period of bonding and development could be a factor in Koshik’s speech imitation.

According to Everland, a study of Koshik was conducted in 2006 by Korean researchers. They concluded that Koshik’s imitations were similar to the tones of a middle-aged Korean man.

The elephant’s voice had a frequency of 550 hertz, similar to the 570 hertz of his trainer. The team concluded that Koshik was imitating his trainer, Kim Jong-gap.

In Korea, Koshik is already a celebrity for his special talent. The Everland Zoo published a children’s book featuring the talking elephant in April.

Currently, the elephant is not on public view at the zoo because of construction to expand its safari facility. He will be available for public viewing next spring.