Foreign ambassadors and other delegates in Pyongyang were seen seated close behind North Korean leader Kim Jong-un when they were invited to watch a musical performance last month, a rare scene unthinkable under the previous rule of reclusive leader Kim Jong-il.

Photographs taken and released by the North's state media Korea Central News Agency (KCNA) show about 30 foreign guests, presumed mostly to be ambassadors and delegates from foreign countries, seated right next to or behind the leader and his wife Ri Sol-ju in the Oct. 29 performance marking the 60th anniversary of the founding of the prestigious Kim Il Sung Military University. 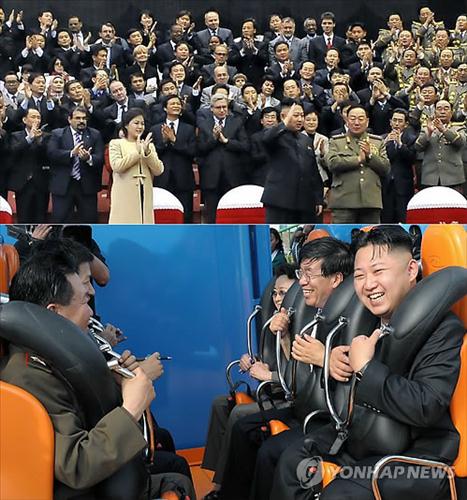 Experts said the scene was deemed unimaginable during the reign of Kim Jong-un's father, late leader Kim Jong-il, who was said to have usually stayed away from events attended by many foreign guests.

Former British ambassador to the North Peter Hughes previously said in Seoul that during the Kim Jong-il era, only Russian and Chinese ambassadors were given the rare opportunity to meet and talk in person with the North Korean leader.

The current leader's friendly actions toward foreign figures in Pyongyang can be understood as in line with a series of recent moves regarded as unconventional in the isolated country.

The country staged a concert featuring Disney characters and unexpectedly made public the identity and images of the leader's young wife, who is often seen accompanying her husband to field guidance trips and other public appearances.

The recent moves are believed to have been taken as part of the new regime's efforts to feature its images as more open-minded and friendly to the world community.

"They seem to try to highlight Kim Jong-un's image as an open and international leader and indicate the country is not completely isolated from the world," said Yang Moon-soo, a professor at the University of North Korean Studies in Seoul.

"(We) do not need those who are not loyal to the party and the leadership, however militarily talented and well-versed in war strategies they are," Kim said in an Oct. 29 speech partially broadcast by a North Korean TV station.

"History shows that soldiers disloyal to the party and the leadership ... later become traitors," Kim said, adding loyalty should be the core symbol of armed revolutionaries.

The remarks are interpreted by South Korean experts to refer to the case of former Army chief Ri Yong-ho, who was dismissed from his position in July, allegedly for being disloyal to the leadership. (Yonhap)