A nightmare start for the Dream Six; Fangs on fire

A nightmare start for the Dream Six; Fangs on fire 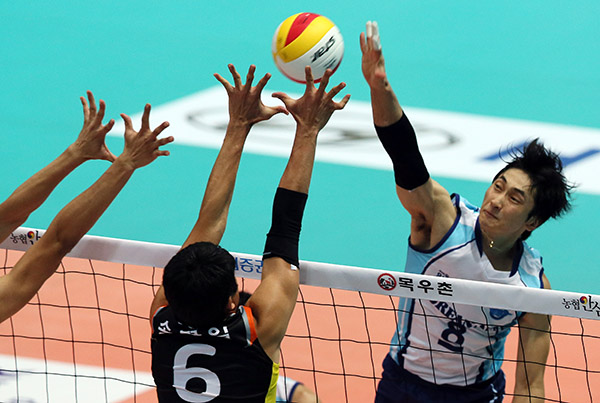 Kim Hak-min of the Korean Air Jumbos spikes over the defensive wall set up by the Rush & Cash Dream Six during their first game of the 2012-13 season in the V-League in Incheon yesterday. The Jumbos won 3-1. [YONHAP]


The Korean Air Jumbos beat the Rush & Cash Dream Six 3-1 in Incheon yesterday on the first weekend of the new season of the V-League.

Meanwhile, the league’s defending champions got off to a good start on Saturday when the Samsung Blue Fangs defeated the Kepco Vixtorm by the same scoreline. The Blue Fangs won their fifth straight title last year. They have beaten the Jumbos in the playoffs in the last two seasons.

In the only league game held yesterday, Martin Nemec of Slovakia led the offense for the hosts, who fought back from a 1-0 deficit. Ryu Yun-sik recorded 12 points for the Jumbos while Lee Young-taek and Kim Hak-min added eight each.

The Dream Six won the first set 25-23 but stumbled later after committing as many as 40 errors.

Six teams are vying for the men’s volleyball championship title, which will be decided when the season wraps up on April 1.

The LIG Greaters will play their first game against the Blue Fangs tomorrow, while the Hyundai Capital Skywalkers take on the Dream Six on Wednesday.

In Saturday’s game, Leonardo Leyva Martines of Cuba scored 51 points for the Blue Fangs to fill the void left by Canadian Gavin Schmitt. Schmitt, who led the Blue Fangs’ offense for the last three seasons, did not extend his contract with the Korean club.

The six-team women’s league also began Saturday and will run through April 1.