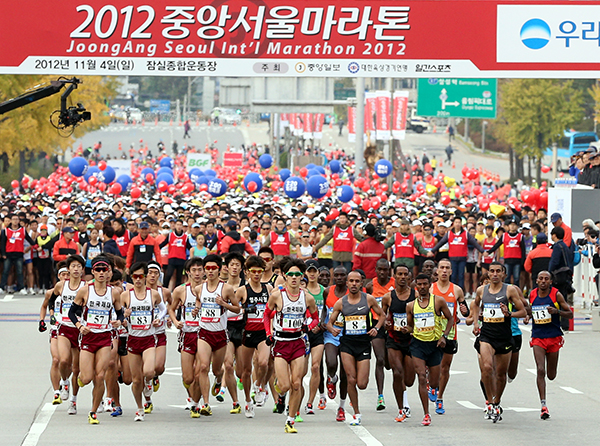 Runners in the elite event of the 2012 JoongAng Seoul International Marathon are off at the starting gun in front of Jamsil Stadium in southern Seoul yesterday. James Kipsang Kwambai of Kenya won the men’s elite event with a time of 2:05:50, the fastest time since the event launched in 1999. By Kim Jin-kyung


James Kipsang Kwambai of Kenya set a new record at the JoongAng Seoul International Marathon as he defended his title yesterday.

It is also the second-fastest record ever set during an international marathon in Korea.

Kenya swept the top three at the JoongAng marathon. Kenyan William Chebon Chebor, the runner-up, came in at 2:10:24 while another Kenyan Benjamin Kolum, finished third at 2:10:35.

Kim Young-jin, 28, of Samsung Electronics, had the best record among Korean runners at 2:17:00 and finished ninth.

He clocked the 30-35 kilometer section at 14 minutes and 42 seconds, his fastest of the day, and nearly maintained the speed to the end. Gebrehiwot finished fifth at 2:11:55, behind the fourth-place Hafid Chani of Morocco who came in at 2:11:11.

After the race, Kwambai said that he knew that he broke the race’s record before hitting the finish line.

Kwambai has the fastest individual record among the participants. His best record is 2:04:27.

He partly credited the record-setting performance to the weather. It rained throughout the event last year.He took home a first prize of $50,000.

Launched in 1999, the JoongAng Seoul International Marathon has grown into one of the most prestigious international marathon events in Korea. The JoongAng Ilbo and its sports affiliate, Ilgan Sports, organize the event along with the Korea Association of Athletics Federations.

There were 15,346 total participants in the events of the day.

The JoongAng Seoul International Marathon has also held a wheelchair racing event since 2009, the first Korean marathon event to do so.

A total of 18 athletes from five countries participated in the wheelchair competition yesterday and Jun Hiromichi, 39, of Japan, won it with the time of 1:35:12.