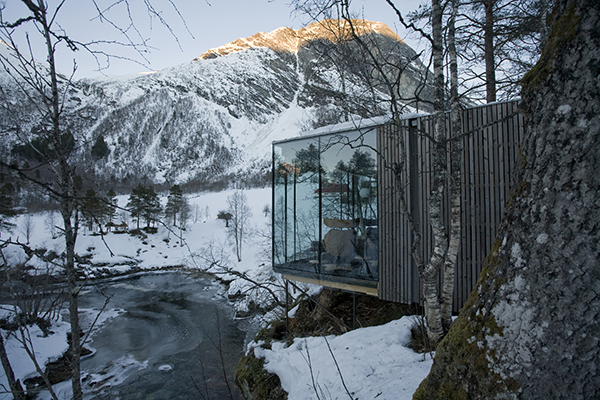 This photo of the Juvet Landscape Hotel in Valldal, western Norway, is part of the “Detour: Architecture and Design along 18 National Tourist Routes.” Provided by the Norwegian Embassy


Scandinavian design and architecture, known for its refined simplicity and environmentally friendly characteristics, has been gaining popularity in Korea over the past few years.

In line with the trend, an exhibition of Norwegian architecture’s harmonious development with the environment will start today at the Korea Foundation Cultural Center Gallery in central Seoul.

According to the Norwegian Embassy in Seoul, which is supporting the exhibition, the Norwegian government has commissioned architects and designers to build these structures as “landmarks themselves” since 1994.

The project that costs 4 billion Norwegian kroner ($697 million) in government spending as well as local contributions will finish around 2020.

“The initiative has so far resulted in about 200 structures, including the emotional monuments for victims of witch hunting in the 17th century in northeastern Norway,” Ellen Margrethe Skilnand, project manager at Norsk Form, told the reporters on Friday.

“The monuments are collaborations between the famous Swiss architect Peter Zumthor and the renowned French-American artist Louise Bourgeois,” added Skilnand.

Norsk Form, a foundation for design and architecture in Norway, is holding the touring exhibition in collaboration with the Norwegian Public Roads Administration, which is in charge of the development of the National Tourist Routes - 18 stretches running through the very best of Norwegian nature.

The new installations standing along the routes also include a viewing platform at Aurland Mountain in southwestern Norway, designed by the Canadian-born, Norway-based architect Todd Saunders and Norwegian Tommie Wilhelmsen.

It is made of laminated timber and steel and is 600 meters (1,970 feet) above the fjords, or the narrow inlets of sea between cliffs, for which Norway is famous.

“The program has invited many already-famous architects but also is providing chances to many young architects through open competition,” explained Sigbjørn Tenfjord, first secretary of the embassy.

* The exhibition runs through Nov. 24. Admission is free. The gallery is open from 10 a.m. to 6 p.m. Closing time is extended to 9 p.m. on Wednesdays. It is closed on Sundays. Go to Euljiro 1-ga Station, line No. 2, exit 3 and walk for five minutes.

Curator’s talk by Ellen Margrethe Skilnand will be provided tomorrow. The talk is given in English and translated into Korean.