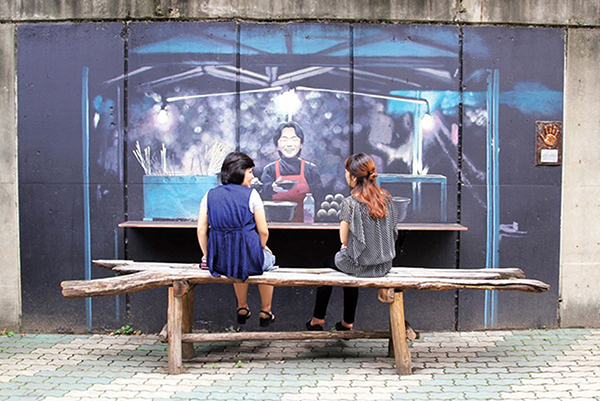 Shoppers at Bangcheon Market in Daegu sit on a bench in front of a painting of a vendor. The market is trying to improve its business through culture and art. Provided by the Agency For Traditional Market Administration


Traditional markets are adding cultural features to lure back customers who shop at discount chains.

Traditional markets have already tried to rejuvenate themselves by improving their facilities and offering discounts. According to the Agency for Traditional Market Administration (ATMA) yesterday, their new hope is culture and art.

Toingin Market in Jongno District, central Seoul, embarked on a transformation last year. Taking advantage of the historical and cultural characteristics of Jongno, it added a stylish pavilion at the entrance of the market and put up a permanent exhibition hall in an empty store that’s named “Interpreting Dreams Craft Shop.”

A “My Way Workshop” is where both merchants and nearby residents learn carpentry together, and it has become popular as a local hangout place.

Last winter, Tongin Market transformed into a street gallery, exhibiting 7,000 pieces of art in the market and nearby cafes.

“The ATMA will continue to expand support projects for traditional markets as well as multifaceted policy research on how they can be equipped with a competitive edge for the future.”

Bangcheon Market in Daebong-dong, Jung District, Daegu, is emerging as a must-see local attraction in the city.

The market has gained popularity with a special street named “Drawing Kim Gwang-seok Again,” where young artists draw portraits of the late singer Kim Gwang-seok, who was from Daegu.

Bangcheon Market is now visited by about 100 people every day.

Paldalmoon Traditional Market has increased its number of visitors by 40 percent by reviving tales of kings visiting the market.

Onyang Spring Market is doing something similar, saying that kings visited the market for rest and recuperation. It’s offering a Royal Table that has a special menu and also health food. Hot-spring foot baths are available for customers free of charge.

“As looking for fun while shopping is a growing trend, traditional markets are regaining vigor,” said Kim at ATMA.