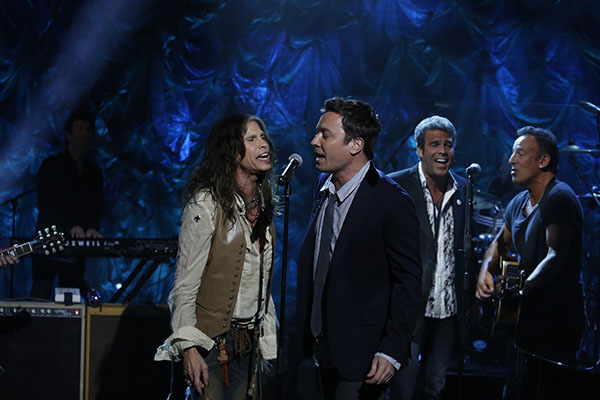 NEW YORK - From “Living On a Prayer’’ to “Living Proof,’’ every song Friday at NBC’s benefit concert for superstorm Sandy victims became a message song.

Hosted by Matt Lauer and featuring performances by Christina Aguilera, Billy Joel and Bruce Springsteen, the hour-long event was heavy on stars and lyrics identified with New Jersey and the New York metropolitan area, which took the brunt of this week’s deadly storm. The telethon was a mix of music, storm footage and calls for donations from Jon Stewart, Tina Fey, Whoopi Goldberg and others.

The mood was somber but hopeful, from Aguilera’s “Beautiful’’ to Bon Jovi’s “Livin’ on a Prayer’’ and a tearful Mary J. Blige’s “Living Proof.’’ Joel rocked out with “Miami 2017 (Seen the Lights Go Out on Broadway),’’ a song born from crisis, New York City’s near bankruptcy in the 1970s, while Jimmy Fallon gamely led an all-star performance of the Drifters’ “Under the Boardwalk’’ that featured Joel, Springsteen and Steven Tyler.

The Aerosmith frontman Tyler then sat behind a piano and gave his all on a strained but deeply emotional “Dream On.’’ Sting was equally passionate during an acoustic, muscular version of the Police hit “Message in a Bottle.’’

The show ended, as it only could, with Springsteen and the E Street Band, tearing into “Land Of Hope and Dreams.’’

The stable of NBC Universal networks, including USA, CNBC, Msnbc, E! Entertainment, The Weather Channel and Bravo, aired the concert live from the NBC studios in Rockefeller Center in midtown Manhattan, several blocks north of where the city went days without power.