A variable rate that doesn’t move

A variable rate that doesn’t move 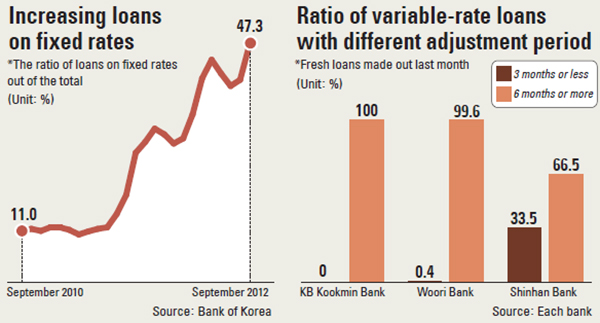 Lee, 52, wasn’t too happy when he went to the bank to make a payment on his loan.

It’s been 11 months since he extended the three-year maturity loan on a variable rate for another year. During the past 11 months the central bank lowered the key borrowing rate twice - yet the interest rate on his loan has remained unchanged at 5.73 percent.

When he complained to the bank, an employee told him that the interest rate remained the same because he extended his debt for a year. As a result, it reflects changes in interest rates after a year instead of reflecting changes in a three-month or six-month period.

This is a contrast to two years ago when almost 90 percent of the variable rate loans reflected the changes every three months. A six- to 12-month variable rate is practically a fixed-rate loan as the lowering of the seven-day repo rate doesn’t affect those loans for a long while.

The banks began to increase the sales of such loans in the second half of last year. This was when the euro zone crisis and the deepening global recession were spreading worries that the central bank would be pressured to lower the key borrowing rate.

Since this year, KB Kookmin Bank has been selling only loan products with a six-month rate. It’s almost the same with Woori Bank. Last month, among the new mortgages taken out by customers, those with a three-month rate only accounted for 0.36 percent of the total.

According to industry analysts, the variable rate on mortgages fell to the 4 percent range this month. However, people who took out loans in June still have to pay a 5 percent rate.

“Offering a loan product with a one-year rate at a time when interest rates are falling is just cheating customers who lack information,” said Cho Nam-hee, head of the consumer protection group Financial Consumer Agency.

Others say the fact that consumers’ choices are limited is a major problem.

“It’s really hard to call loans with six- to 12-month rates, variable rate products,” said Kim Woo-jin, a researcher at the Korea Institute of Finance. “Especially when those with three-month rates are no longer selling in the market, consumers are being deprived of a choice.”

The banks say they are just following the orders of the financial regulators to stabilize the household debt situation.

“Customers could face a burden when they borrow loans with shorter adjustment periods and the key borrowing rate starts being raised,” said an official at KB Kookmin Bank.

“It is the financial regulators policy to expand loans on fixed rates as well as loans with longer adjustment period.”