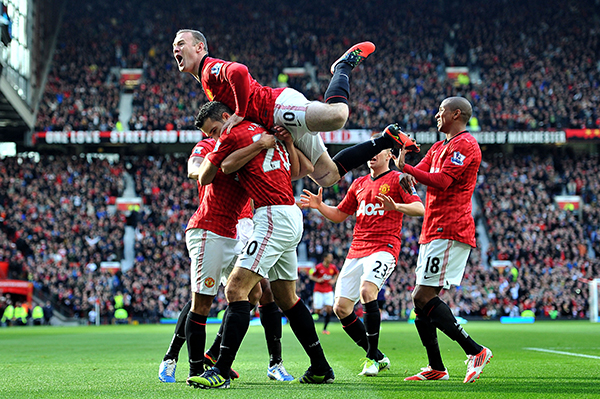 Manchester United’s Robin van Persie, No. 20, is congratulated by teammates after scoring at home against Arsenal during their English Premier League match at Old Trafford in England on Saturday. United won 2-1. [AP/YONHAP]


Robin van Persie helped fire Manchester United to the top of the Premier League with a 2-1 win over Arsenal on Saturday as the Dutchman scored against his former club at Old Trafford.

Van Persie’s early effort and a second-half header from Patrice Evra saw United leapfrog Chelsea after the London side conceded a late equalizer in a 1-1 draw at Swansea City.

Victor Moses put Chelsea ahead just past the hour in south Wales but Pablo Hernandez grabbed a point in the 88th minute.

United are a point clear of the European champions with 24 from 10 games while Manchester City can match their points tally if they win at West Ham United in the late game.

Everton moved into fourth place with 17 points despite conceding a last-gasp equalizer in a 2-2 draw at Fulham.

Tottenham Hotspur slipped out of the top four after a surprise 1-0 home defeat by Wigan Athletic.

Norwich City beat Stoke City 1-0 while Aston Villa achieved only their second win of the season, 1-0 at Sunderland.

After a blood and thunder clash at Stamford Bridge a week ago Sunday when United beat Chelsea 3-2 to end the west London team’s unbeaten start to the Premier League season they might have expected a similar battle at home to Arsenal.

They need not have worried, however, as the club they once regularly sparred with for silverware produced a listless performance that could have been more harshly punished.

United, who thrashed Arsenal 8-2 in the corresponding fixture last season, could even afford a missed penalty by Wayne Rooney on the stroke of halftime.

Santi Cazorla’s well-taken consolation goal in stoppage time flattered the visitors who had midfielder Jack Wilshere sent off for a second booking after the break.

All the more galling for Arsenal was the sight of van Persie scoring against them after eight years of banging in goals for the north London club who are losing touch in the title race.

The Dutchman, who joined United from Arsenal in August having scored 37 league goals last season, needed less than three minutes to score after a mistake by Thomas Vermaelen.

“A special day, in the end it was quite a game,” van Persie, who did not celebrate his goal, told Sky Sports. “It speaks for itself [why I did not celebrate]. I played eight years there and had a fantastic time. I wanted to respect the fans, the manager and the whole club.”

In Madrid, Barcelona pulled three points clear of Atletico Madrid at the top of La Liga when David Villa scored and created a goal for Jordi Alba in a 3-1 win at home to promoted Celta Vigo on Saturday.

Celta have not won at the Nou Camp for 70 years but surprised their illustrious hosts with some neat play and Mario Bermejo leveled at 1-1 three minutes after Adriano’s 21st-minute opener.