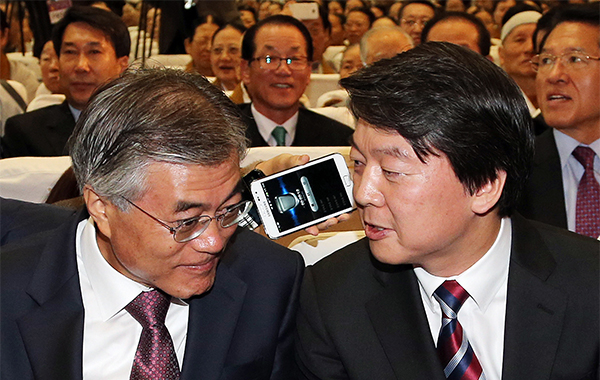 
With less than a month and half left before the presidential election, no TV debate has taken place among the major presidential candidates yet as the contenders blamed each other for making political calculations and favoring more advantageous rules.

Park Geun-hye of the Saenuri Party, Moon Jae-in of the Democratic United Party and independent Ahn Cheol-soo are the three front-runners for the Dec. 19 presidential election, but there have been no debates, as of yesterday.

Since Korea adopted the presidential TV debate in 1997, it has become one of the crucial ways for the voters to see and compare the candidates’ visions. In 1997, a total of 54 TV debates, including the three events hosted by the National Election Commission, took place. In 2002, a total of 27 TV debates took place and 11 debates were held in 2007.

But it appears voters will have to wait until the very last minute to view the debates this year. The National Election Commission will host TV debates on Dec. 4, 10 and 16.

Under the election law, media institutions are allowed to host a debate with major candidates one year before the presidential election. Ahn was the last major contender to jump into the race by announcing his bid on Sept. 19, but no debate among Park, Moon and Ahn has taken place since then.

According to the Kwanhun Club, a senior journalists’ association, it sent invitations to all three candidates to host a TV debate, but none of their campaigns gave responses.

The Korea Broadcasting Journalist Club also proposed a three-day TV debate, in which each candidate will have one day to present their views, but the plan hasn’t been confirmed.

The latest proposal was made by KBS, but the plan was also scrapped recently. Ahn yesterday criticized Park for refusing to participate in the event, thus making the broadcaster cancel the plan.

According to Jeong Yeon-sun, spokeswoman for Ahn, KBS made a proposal on Oct. 29 that it wants to hold a three-day-long debate from Nov. 13 to 15. Instead of having all three candidates sit together, the idea was to give one day to each contender to present their visions and policies.

Although Ahn said he would attend, the KBS scrapped the plan because Park refused to join, Jeong claimed. “We want to ask Park if she, who refused to attend a debate, really has the qualifications and abilities to be the country’s leader,” Jeong said yesterday.

Moon’s campaign also deplored that there haven’t been any debates. Representative Kim Hyun-mi, a senior public affairs officer for the Moon campaign, said it was unprecedented that no TV debate has taken place with 45 days left before the election because some candidates were reluctant to participate.

She also said the broadcasters still need to host debates even if some candidates may refuse to attend because it would be depriving the rights of other cooperative candidates.

The Park campaign has said the Saenuri presidential candidate is more than willing to attend any TV debate, as long as the liberals agree to give up their scheme of consolidating candidacies. Lee Jung-hyun, the chief public affairs official of the Park campaign, reiterated the position once again yesterday.

“The KBS debate was delayed because of the broadcaster’s own decision,” Lee said yesterday. “Park didn’t cancel it.”

Lee said Park has agreed to join the event, but said she wants to go on the last day, after Moon and Ahn.

“We proposed to go last because Moon and Ahn can consolidate their candidacies,” Lee said. “So we said we want to listen to them first and then we will go last.”

“That is a smear campaign,” he said.