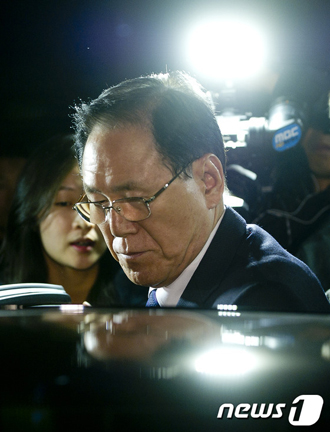 Kim Paik-joon, a former senior secretary to the president for administrative affairs, denied any involvement in the controversial project in which critics say taxpayer money was used, as he appeared before prosecutors.

"I was not involved," the 72-year-old Kim responded to a reporter who asked about the land deal.

The scandal centers around allegations that the president's son, Lee Si-hyung, and the presidential security service used public funds and violated real estate laws when they jointly bought a plot of land last year for the retirement home in southern Seoul.

The former aide, however, admitted that the presidential security service paid a commission fee worth 11 million won (US$10,077) on behalf of Lee Si-hyung to a real estate broker, contradicting a statement by Kim In-jong, who served as chief of the presidential security service until October of last year and who denied the proxy payment on Friday.

Lee Si-hyung and the president's eldest brother have already testified before special prosecutors.

Since the allegations were first raised by the opposition parties, the presidential office has flatly rejected all suspicions over the project.

Lee scrapped the project and has decided to move into his existing private home after he leaves office next February. (Yonhap)