How candidates fund their campaigns

How candidates fund their campaigns 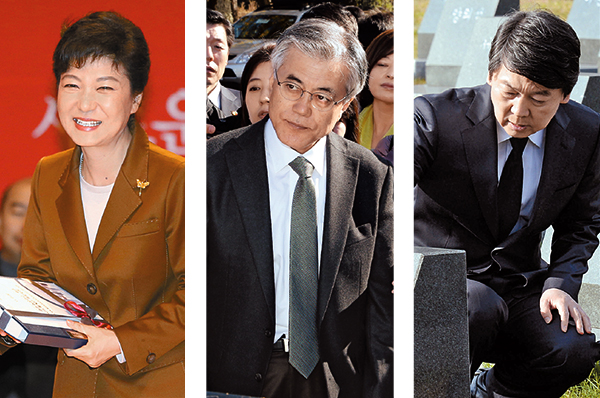 Left: Park Geun-hye, presidential candidate of the ruling Saenuri Party, campaigns on Friday at a meeting with businessmen organized by the Korea International Trade Association. [YONHAP] Center: Moon Jae-in, presidential candidate of the main opposition Democratic United Party, checks on city construction in Wonju, Gangwon, on Friday.[YONHAP] Right: Independent candidate Ahn Cheol-soo pays respects on Friday at a tombstone of a victim killed during an uprising on Jeju Island that lasted from 1948 to 1954. [NEWSIS]


Presidential campaigns are costly, and irregularities involving campaign finances have often been an Achilles’ heel for Korea’s past presidents.

As political reform has become a trending topic in the upcoming presidential election, three major candidates promised transparent campaign finance methods and came up with creative ways to raise funds.

According to the National Election Commission, each presidential candidate is entitled to spend 55.9 billion won ($51.3 million) on their campaigns until the Dec. 19 presidential election.

The candidates are allowed to receive contributions from their patrons of up to 5 percent of the sum, roughly 2.8 billion won each.

Park Geun-hye, the presidential candidate of the ruling Saenuri Party, plans to receive donations to that ceiling. She is also expected to receive 16 billion won from the state subsidy for representing a political party. The amount was determined based on the number of lawmakers inside the legislature.

She will then take out up to 40 billion won in loans from financial institutions. The party said it is confident it will be able to pay the sum back after the election because the state reimburses the entire campaign costs for a candidate who earns more than 15 percent of the total votes in the election.

Then, he employed an unconventional method to finance his campaign. He raised 20 billion won by selling an investment product called the “Moon Jae-in Ivy Fund.” The sale of the fund began at 9 a.m. on Oct. 22, and he managed to raise the 20 billion won in 56 hours from 34,799 people. The presidential candidate promised to pay back investors after the election with annual interest of 3.09 percent.

“You will see a president who is in debt to the people, but not conglomerates,” Moon said on Oct. 27 when he met with his investors.

He also plans to raise another 20 billion won during November, depending on the process of candidate consolidation with independent Ahn Cheol-soo. Concerns were raised that, if Moon decided to quit the race as a result of consolidation with liberal candidate Ahn, his investors would lose their money because he won’t be eligible for the state reimbursement of campaign funds.

The Moon campaign said the money raised through investment funds won’t be spent until the Nov. 26 deadline for candidate registration to ensure returns to investors.

Ahn, who is not backed by a political party, plans to raise 2.8 billion won from donations but won’t receive any money from the state. He also plans to follow Moon’s suit and sell investment funds to the public, but no specific announcement was made as of yesterday about the sale.

Ahn’s Seoul National University medical school friends are strong backers of the former doctor. “All of the medical doctors around the nation also said they will give their support,” an Ahn campaign official said.

Since the announcement of his presidential bid on Sept. 19, Ahn has spent more than 600 million won to rent an office and operate his campaign. Sources said he collected about 200 million won from his donors, far lower than the ceiling limit of 2.8 billion won, but the Ahn campaign has not officially announced the amount of contributions made to the independent candidate.

Until now, Ahn has been financing his campaign with his private funds, and his spokesman, Yoo Min-young, said Ahn’s investment fund sale will begin soon. “Since his support rate is strong, we won’t see difficulty in financing the campaign,” Yoo said.

According to the JoongAng Sunday, Park and Moon, backed by major political parties, have different types of patrons. As they both were elected as presidential candidates through primaries, they collected donations since August and September. Ahn didn’t go through any primary, thus he made no report to the National Election Commission.

Park’s key aides and businessmen made large contributions to her campaign. The ceiling limit for a supporter’s donation is 10 million won, and Park had 54 patrons who met the limit. In contrast, Moon had 14 patrons who each paid 10 million won.

Moon, however, had a larger number of patrons. He had 4,466 donors, while Park had 865 donors. He also collected 10.48 million won from anonymous donors. Under the current law, a donor is allowed to remain anonymous if the total sum of annual contributions remains below 5 million won. The figures are a clear change from the past practices of money-ridden elections, political observers said.

In 1993, the late Hyundai Group founder Chung Ju-yung said that he spent 80 billion won for the legislative elections and the presidential election in 1992, in which he ran as the presidential candidate of his own political party. “If I didn’t run, I wonder how much more I had to spend to satisfy other candidates,” Chung said at the time.

In late 2003, then President Roh Moo-hyun said he was willing to resign and retire from politics if his illegal campaign fund was more than one-tenth of the Grand National Party, the predecessor of the Saenuri Party. At the time, the GNP raised 82.3 billion won in illegal funds.

The prosecution’s investigation later revealed that Roh’s campaign used 11.3 billion won in illegal funds, one-eighth of his conservative rival. Although Roh was confident enough to say that he used significantly less illegal money, he wasn’t free from unlawful fund-raising.

This time, Park, Moon and Ahn all promised a clean election free from illegal campaign funding. The National Election Commission also unveils their fund-raising and campaign spending details through its Internet site.

The practice of paying the expenses of journalists who cover their campaigns was also ended.

“In 2002, the party sent 20 million won each to city and provincial chapters and we sometimes gave more to the areas where the contests are tight,” said a Saenuri Party official who has observed presidential elections since 1997. “In 1997, we even spent more. But this time, money has become scarce. Kim Moo-sung, the campaign headquarters chief, gave 100,000 won to each chapter for the staffers’ gatherings.”

“The top priority is getting rid of the illegal campaign funds,” said Ahn Dae-hee, the political reform committee chief of Park’s campaign.

“No one will go to jail after the election,” said Woo Won-shik, chief fund manager for the Moon campaign.

The business community and the civic groups largely welcome the change. “In the past, owners of major conglomerates left the country before the presidential elections, but this time, you don’t see it anymore,” said a senior executive of a conglomerate. “It means they are feeling less pressure to give funds to the candidates.”

Song June-ho, professor of economics at Anyang University who co-chairs the Young Korean Academy’s Transparency Movement, said it is important to allow civic groups to monitor the transparency of presidential election funds. “Candidates always promise to respect the ceiling for campaign fund spending,” he said. “But we believe they almost always spend more.”