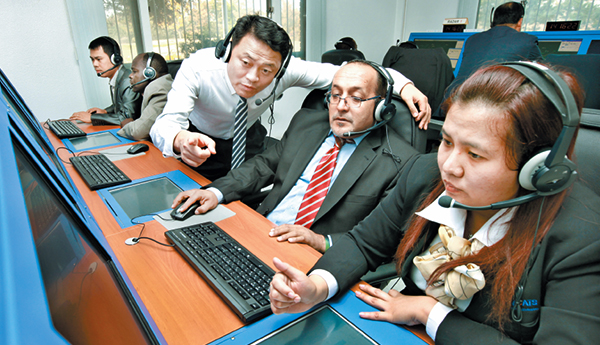 
“Roger, KAL 502, descending 5,000 feet,” states an air traffic controller from Egypt into his headpiece, peering over a simulation screen displaying an airfield of Korea.

He speaks to a mock pilot from Senegal in the simulator across the hall at the aviation training center in North Chungcheong. They are a group of air traffic controllers from 14 countries training at the Civil Aviation Training Center of the Korea Airports Corporation in Cheongwon, North Chungcheong, on Oct. 29. Half are acting as air traffic controllers and the other half pilots, before they switch places.

“In the beginning, new aircraft would appear on the field at intervals of five minutes. Now, the controllers are more experienced, so they appear every 2.5 minutes,” explains their instructor Lee Dae-geun as more numbered dots appear on the screen.

The controllers’ task is to keep in communication with the pilots of each of the aircraft and maintain the correct distance between planes while promptly directing the traffic into ascent or descent. They can deal with some 30 aircraft an hour.

“And as a part of the simulation system, we send out emergency situations like a bird caught in the engine, a passenger with a medical situation which requires immediate landing or a terrorist hijacking.”

“It is their task to remain calm and in control of the situation and communicate with pilots through the emergency. They have to respect the pilot’s decision while making sure that proper procedures are taken. For instance, in the case of a broken engine or an explosion, even as the plane is landing, the firefighters have to be on standby ready to put out the fire and ambulances have to be waiting.”

Korea is known for one of the best airports in the world, the award-winning Incheon International Airport, and also for excellent airline service. But to support the influx of air traffic in the country, Korea has focused on developing its aviation technology and training top pilots, controllers and instructors.

“The 1988 Olympics was the point where air traffic really changed in Korea, and significant development was made in the 1990s,” said Lee Chang-sung, senior air traffic control instructor.

The 14 air traffic controllers from countries including Cambodia, Honduras, Libya, Tanzania, Uganda, Senegal and Sri Lanka participated in the four-week long program which began on radar approach control, one of the International Civil Aviation Organization (ICAO) and Republic of Korea Fellowship Training Programs.

Those selected for the course, also supported by the Korea International Cooperation Agency (Koica) and the Ministry of Land, Transport and Maritime Affairs which began Oct. 7 and ended Friday, have little or no experience in the field of radar approach control, a method where radar antennas provide visual representations of aircraft within a given airspace.

The trainees are housed at the dormitory at the training center’s international building, which opened three years ago, and also had an opportunity to tour the country and experience cultural performances between training on weekends in the program.

The Korea Airports Corporation, established in 1980, manages and operates 14 airports in the country including Gimpo, Gimhae, Jeju, Daegu and Cheongju airports along with the Area Control Center.

Located between the capital of North Chungcheong and Cheongwon, an area that houses a presidential villa and is known for its brilliant amber and golden autumn foliage, the Civil Aviation Training Center since 2001 has provided training programs for developing countries commissioned by Koica and the International Civil Aviation Organization.

The center is the only training institution in Korea specializing in civil aviation and was founded in 1984 with the support of the ICAO and the United Nations Development Programme.

Bianca Rozen, 42, is one of 19 air traffic controllers in Suriname. She has been working in the field for over two decades. Her airport installed radar approach equipment last year. The problem was nobody knew how to use it.

“With the radar approach system not only can you better control traffic in a small space, but it is much safer as you can actually see and know what is happening within your airspace,” said Rozen.

“I am grateful to be selected for this program because I actually got to learn how the system works.”

Without radar approach, controllers have to envision the air field in their minds when they receive signals and employ the old-school procedural method of drawing out the air field. Korea completed the switch over to the radar approach in the 1990s.

With a radar system, airplanes can stay within a 5 nautical mile range from each other. Without radar approach, planes have to maintain a 20 nautical mile distance.

“It’s a high-stress job. You have to multitask and also learn how to prioritize. If you get five calls at once, you have to know which plane is the most urgent. As a controller, you have 600 lives in your hand. You cannot simply say ‘please come back tomorrow,’” she added.

When Rozen goes back home, she will be immediately put in charge of organizing training and courses for the rest of the controllers on radar approach control.

“The population of Suriname is half a million people compared to 50 million in Korea,” said Rozen. “There’s always a lack of personnel in air traffic, not just at home, but internationally. But the air traffic is growing, and we are in the process of upgrading our service, and I am happy to be a part of that change.”

Mohammaed Ibrahim, 25, from Egypt has three years of experience as an air traffic controller, and his goal is to become top in the field.

When he goes back to Cairo, he will be taking the radar approach control examination to become licensed and said, “Though the airfields are different between Egypt and Korea, I feel ready to take the exam through my preparation here. My first target as controller is always safety and then expeditiousness.”

“The main difference between controlling here and back home is that the terrain here is different, full of mountains and different seasons - in the winter, there is snow,” Ibrahim said.

“I find Koreans are highly technical, more technical than people back home. Being able to train with 14 controllers from 14 different countries is such a valuable networking opportunity because I get to learn a little bit about not only air traffic control in Korea but what techniques and facilities they use in those countries as well.”

Oh Seong-cheol, the CEO of the Civil Aviation Training Center, said, “Bringing in people from abroad to train in aviation is a good opportunity for them to learn about the aviation facilities and equipment we have here and in turn has led to an increasing amount of overseas exports of the equipment we have developed.”

The Korea Airport Corporation also has developed its own aviation IT technology including air navigation aids, such as the doppler VHF omnidirectional radio range (DVOR), antennas and energy-efficient ramp lights.

“We had to develop our own equipment because the companies abroad did not share information on how to build DVOR equipment, and we plan to share the manuals with other countries to help them develop their aviation technology because we were in the same position where we had to develop everything from scratch,” Oh said.

Between 2005 and 2012, the Korea Airport Corporation has exported to 14 countries some 30.6 billion won ($28 million) worth of aviation equipment.