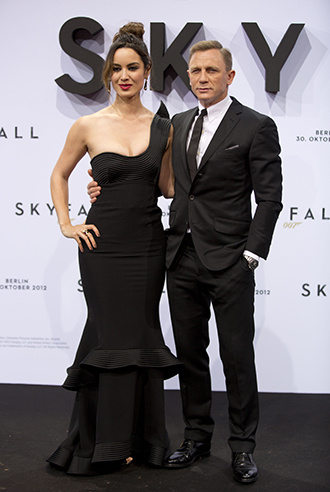 TORONTO - He’s got gadgets, girls and a great suit. James Bond turns 50, and as the superspy’s latest movie “Skyfall” opens in North America this week, Toronto hosts the first global stop for the show “Designing 007 - Fifty Years of Bond Style.”

The exhibit, unveiled in London earlier this year, provides a behind-the-scenes look at the 23 films that have fascinated viewers around the world for decades.

“Bond lays out a lot of the blueprint for how you make a modern action movie.”

From evil henchman Oddjob’s lethal bowler hat to MI6 ID cards and a number of Bond’s passports, the show highlights the themes and design elements that emerge in each of the productions.

The Bond glitz is encapsulated in a room dedicated to all things gold, which include the only surviving copy of villain Scaramanga’s gun from “The Man With the Golden Gun” (1974) and a recreation of Jill Masterson’s gold-coated body in “Goldfinger” (1964).

The “Q branch” meanwhile is all about the weapons and gadgets. While some of the props will look like toys to the smartphone generation, they were fantastic high-tech items when they appeared on screen decades ago.

Not to be missed is a model of the Lotus Esprit S1, Bond’s super sports car in “The Spy Who Loved Me,” which highlights the spy’s luxurious, but practical, esthetic.

Other costume highlights include the many looks of various “Bond girls,” which means bikinis, ball gowns and diamonds galore.