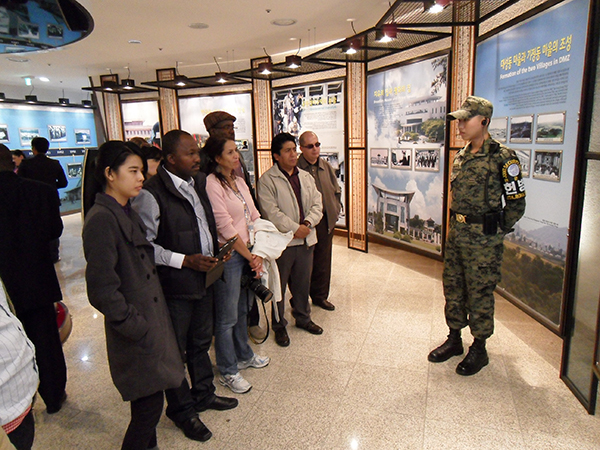 Diplomats from 22 countries visit the Demilitarized Zone on Oct. 26 as part of a two-week training program hosted by the Korea National Diplomatic Academy and the Ministry of Foreign Affairs. Provided by the academy


“Though I have read about the situation in the Koreas, it was different to see everything with my own eyes,” said Tharwa Alnaimat, 43, first secretary of Asian affairs at Jordan’s Ministry of Foreign Affairs, recalling her visit to the Demilitarized Zone.

“Walking down the tunnel, we felt a sense of silence. We saw one North Korean soldier there. I took one photograph the whole trip, though we were told we could take photographs freely.”

Alnaimat was among a group of diplomats from 22 countries from Asia, Africa, Eastern Europe and South America who participated in a two-week program sponsored by the Ministry of Foreign Affairs.

“Because in the past Jordan also had border issues with Israel, so we can relate to the Koreas’ plight, [even] though our situation has been resolved,” she said on Oct. 26 at the Korea National Diplomatic Academy in Seocho District, southern Seoul. “I feel sympathy for the Korean people.”

Alnaimat was posted in Japan for four years, but this was her first time in Korea during her 12-year career. She was nominated for the program by her ministry.

The 13th Partnership Program for Diplomats ran from Oct. 15 to 27 and was hosted by the Korea National Diplomatic Academy (KNDA), a foreign policy think tank, with the support of the Korea International Cooperation Agency.

Carlos Eduardo Meyer Sosa, 23, the youngest of the group, works at the Asia subdivision of Guatemala’s Ministry of Foreign Affairs.

“Truthfully, at the beginning of the DMZ tour, I was scared, I didn’t know what to expect,” said Sosa. The diplomats visited the Third Tunnel of Aggression, which was discovered in 1978. Some 10,000 soldiers can move through it in the space of an hour. “But it was a very important day of my life, in which I understood more about the war of Korea, and personally I hope one day the Korean Peninsula will be united.”

They also attended various cultural and education trips to the Rural Development Administration Gene Bank in Suwon, Gyeonggi, the National Gugak Center in southern Seoul, and Posco in Pohang.

“The reason why we have this program is because we believe in investment and people,” said Kim Byung-kook, chancellor of the KNDA, who was formerly president of the Korea Foundation. “When I am asked the question of how to define Korea and what it represents, I am puzzled by the fact that I can’t think of a single image.” He added that he considered it a positive that Korea “cannot be thought of as a single class or social structure.”

“But I would best define Korea by its ‘gi’ or energy,” Kim said.