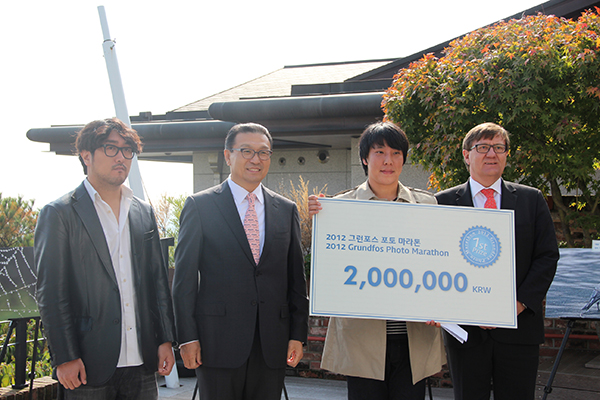 
Winners of the Korean Photomarathon, a 24-hour photography competition open to the general public, were announced at the residence of the Danish ambassador in Seongbuk District, northern Seoul, on Wednesday.

“This year’s theme was especially meaningful, keeping along the lines of ‘environmentally friendly,’?” said Lee Kang-ho, CEO of Grundfos Pumps Korea. “The winner captures the vitality of one drop of water.”

Participants had to shoot or select photos from designated themes and submit them within 24 hours last month. There were about 150 contestants this year, roughly twice as many as last, and they were judged on photos relating to the five themes - food, water, green, wish and together. It was the 2nd annual competition in Korea sponsored by Danish-based Grundfos and Photo Plus.

The first Photomarathon was held in Denmark in 1989 and has spread around the world.

“My photographs were taken from Thailand, New Zealand and Busan, and I put a lot of thought into how they would match each theme,” said winner Shin Myung-gun, 32, a photography major.

“I was very impressed with both winners from Busan, and pleased that we are reaching out more to other parts of Korea because most of our activities are based in Seoul,” said Danish Ambassador Peter Lysholt Hansen.

“As more people participate, more people can learn about Denmark,” said the ambassador. One of the embassy’s favorite submissions interpreted the five themes using Legos, Denmark’s most popular toy.