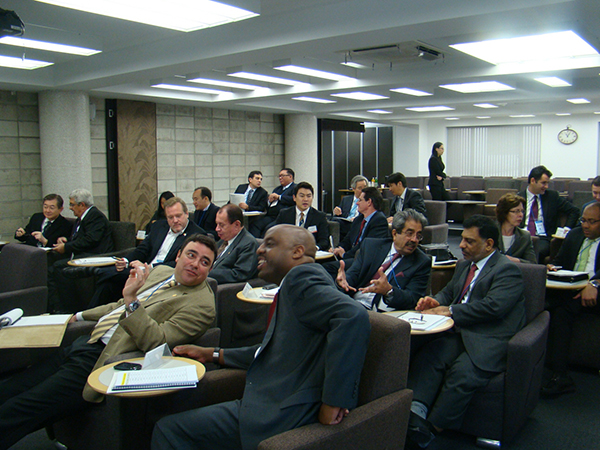 Diplomats engage in a mock negotiation session at the Institute of Global Management in Jung District, central Seoul, on Thursday. The negotiation course is mandatory for all Korean ambassadors. Provided by the institute


A group of foreign dignitaries divided into two groups faced each other in a conference room in the Institute of Global Management (IGM) in central Seoul, on Thursday.

They were not discussing foreign policy or international relations. Instead, they were in the midst of a simulating a negotiation between two parties - closing a deal between a real estate development company and Korea’s leading discount retailer.

“We won’t break even at the rate you have proposed,” stated Usana Berananda, minister counselor of the Thailand Embassy in Seoul, representing the vice president of the discount retailer. “How confident are you that the area will be profitable for our company?”

Rwandan Ambassador to Seoul Eugene S. Kayihura, who represented the opposing vice president, responded, “We have an 85 percent confidence level that even if the automobile company leaves, we will have many other opportunities that may bring even more thriving business into the area.”

After an hour of banter, a deal was reached in the last five minutes, and both parties shook hands.

In the first IGM Negotiation Course for Diplomatic Dignitaries, 21 diplomats from embassies including the United States, Canada, Serbia, Australia, Afghanistan and Vietnam participated in the two-day course, the first part having been held last Thursday and the second evaluation day slated for this Thursday, in which they learned the principles of negotiation.

As a final exercise, the diplomats, including the ambassadors of Rwanda, Oman, Honduras, Afghanistan and Costa Rica to Seoul, were divided into groups and given roles including lawyer, consultant, CFO, director and vice president of fictional companies for a mock negotiation session.

The Institute of Global Management, founded in 2003, is a management research and executive education private think tank and has trained over 10,000 people in top companies, including numerous executives from companies such as KT, Hanjin Chemical and SK Group.

Ecuadorian Ambassador to Seoul Nicolas Trujillo, who played the role of the CFO of the discount retailer, or the “bad guy,” stated, “This was a great experience not only to network with other diplomats but to learn what our Korean counterparts in the diplomatic court have been learning.”

Since 2010, the Korean government requires all of its current and upcoming ambassadors to complete IGM’s negotiation program prior to being deployed overseas.

“The course for is pretty much identical to the two-day mandatory course we hold for the Korean dignitaries except for the case studies we use,” said Junn Haan-suk, the IGM negotiations instructor for the foreign dignitaries’ course, and, of course, the language.

The negotiation program eventually became mandatory for the Korean ambassadors, “because sending our diplomats out without formal training is like sending a soldier out without a gun,” Junn said.

The institute emphasizes the “10 commandments of negotiation,” including identifying the counterpart’s interests, setting realistic standards and making an effort to reach a “win-win agreement.”

Though he has engaged in other negotiation programs, Trujillo stated, “This is by far the best,” citing “the quality and clarity of material delivered is very logical and detailed.”