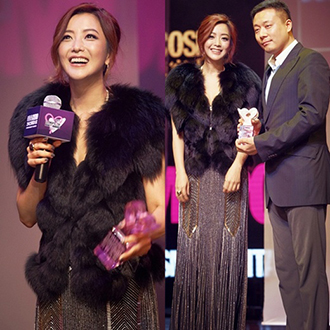 At the ninth annual Cosmopolitan Asia Beauty Awards in Shanghai this year, actress Kim Hee-sun was recognized as the most iconic woman of 2012.

At the awards ceremony that took place on Thursday at Culture Square, Kim took to the stage? with Chinese actress Crystal Liu and Angelababy of Hong Kong, two candidates who were also picked as the top three iconic women of the year.

Kim, 35, trumped the two girls in their 20s and dazzled the crowd in her long black dress and shawl.

The Korean actress, who made her much-awaited comeback to the small screen this year, also showed her wit by complimenting the male host, calling him handsome.

Kim’s agency said that after her six-year hiatus, Chinese fans are taking an active interest in Kim once again.

“As the drama ‘Faith’ will air in China, we expect her fan base to grow even more,” said a spokesperson from Kim’s agency.

The Cosmopolitan Asia Beauty Awards recognizes celebrities from Asia for their unique sense of style.