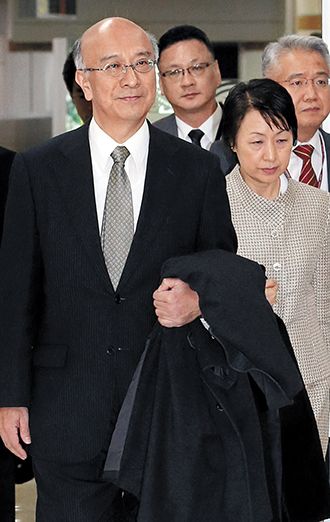 Koro Bessho, the newly appointed Japanese ambassador to Seoul, said last week that building relations between the two nations based on mutual trust is important to Korea, Japan and the region.

“I have been posted [as ambassador] during a difficult time in Korea-Japan relations,” Bessho told reporters upon arriving at the airport. “But I’m sure that both Koreans and Japanese know the importance of bilateral relations not only in Asia but also in the world.

“To establish strong bilateral ties, I will listen carefully to Korea’s position and also deliver Japan’s position as well. I believe that it is the duty of an ambassador to mediate both countries’ stances. I plan to strengthen ties to better understand each other deeply.”

Japan’s Foreign Ministry appointed Bessho in August, when tensions between Korea and Japan heightened over the Dokdo islets, Korea’s easternmost territory over which Japan has claimed sovereignty, and the “comfort women” issue, a euphemistic reference to Korean women who were forced into sexual slavery by the Japanese military during World War II.

The relationship between the two countries turned sour after President Lee Myung-bak made an unprecedented visit to Dokdo on Aug. 10. Lee also demanded an apology from the Japanese emperor regarding the occupation of the peninsula.

Japan immediately responded by pressuring Korea to take the Dokdo issue to the International Court of Justice and criticized President Lee’s remarks on the emperor, demanding an apology.

Influential right-wing politicians in Japan have also visited the Yasukuni Shrine and paid respects to war criminals, which Korea strongly protests against.

Most recently, a far-right Japanese activist reportedly planted two white wooden stakes in the Korean consulate in New York and by a historic monument in New Jersey claiming Japan’s territorial rights over Dokdo.

Whether or not the change of Japanese ambassadors in Seoul will have an impact on bilateral relations remains unclear. Bessho has made some optimistic comments about his view of the relationship.

“The relationship between Korea and Japan is significant not only in Asia but also throughout the world,” he said. “I will do my best to establish a relationship based on trust.”

An official of the Ministry of Foreign Affairs in Seoul said that Bessho is “an expert on Korea that who is being named as the Japanese Foreign Ministry’s next vice minister.”

There have been sources saying that the appointment of Bessho by the Foreign Ministry was significant and showed Japan’s willingness to improve relations with South Korea as well as the North.

“I’ve been ordered by [Japanese] Prime Minister Yoshihiko Noda to build desirable and trust-based relations with Korea,” he said.