The members of Sistar, in white, perform “Alone.” From left are Soyou, Bora, Hyolyn and Dasom. rovided by Starship Entertainment


Do you think idol and K-pop groups are “singers who can’t sing,” focusing instead on choreography and the visual aspects of performances?

Although the “four girls are not as pretty as other girl groups like Girls’ Generation, they know how to sing,” says Kim Si-dae, 40, CEO of Starship Entertainment.

Hyolyn, 21, the leader of Sistar and nicknamed “Hyo-yonce,” instantly caught Kim’s attention with her “powerful Beyonce-like voice, which is quite exceptional in Korea.”

Kim says he wanted to make a girl group that has no difficulty staging live performances.

“Hyolyn has an inborn talent of singing. We thought about making Hyolyn debut as a solo as she could sing, but didn’t know how to dance. But after training her for a year, we saw her capability as a girl group member. It only took her a year to get to a certain level in dancing that usually takes three years for others,” Kim said.

With Hyolyn in place, Kim added three more girls and launched Sistar, which debuted in June 2010.

Today, Sistar - Starship Entertainment’s “second child” - is immensely popular at home and abroad, standing shoulder to shoulder with top girl groups like Girls’ Generation and the Wonder Girls, who belong to the country’s top entertainment agencies, SM and JYP, respectively.

The girl group’s latest mini-album, “Alone,” ranked No. 1 on one of three major broadcasting station’s music programs and No. 1 on the Billboard K-pop Hot 100 chart for three weeks.

Kim says that as more and more people recognized Sistar as a “girl group who can sing,” Starship Entertainment was able to define its identity as an agency that “stresses singing ability.” Starship’s “first-born,” K.Will, is also known as a talented ballad singer “who has a powerful voice, but falls short compared to other singers in terms of looks.”

In the Korea JoongAng Daily’s sixth installment of the “Inside K-pop” series, we take a look at the talent behind the talent at Starship Entertainment. 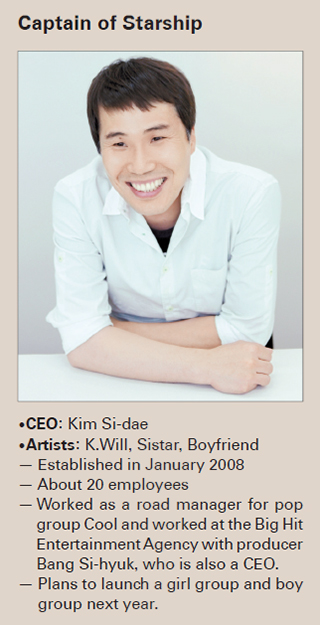 Starship Entertainment occupies three floors of a building in Bangbae-dong, southern Seoul. On each floor there is a management office and practice room with its doors facing each other. Other agencies typically group offices together on one floor or have a separate building for practice rooms.

“It was a big investment for Starship [to have practice rooms on each floor],” says Kim. “We could’ve separated the practice rooms from the main building and located them elsewhere, where the rent is cheaper, but I thought this was the best way to be closer to the artists and trainees.”

As Kim points out, the inside of a practice room can be seen when leaving his office.

“Starship is not a small company, but all our employees try their best to communicate with artists and trainees as parents do with their children,” Kim said.

Moreover, Kim said it was a “brave investment” to build four practice rooms, when most other entertainment agencies have one or two.

“Because there are many practice rooms, artists can come in and practice anytime and know there’s always a room,” he says, adding he thinks this is why his “children” learn faster than others in other agencies.

“Even during her free time, Hyolyn comes to the practice room and goes back home after practicing singing and dancing for one or two hours,” Kim says. “I think she feels comfortable here, being able to practice anytime she wants without being anxious about taking advantage of the practice room as there are plenty for other artists to practice.”

Kim says having multiple practice rooms means his talent can debut faster than other agencies’ artists.

“Artists at first are like diamonds in the rough that need processing and burnishing in order to shine in front of the people and be considered as something precious,” he says. “So before we reveal what they are really worth to the public, we have to make them shine as much as possible. Artists shine through a lot of practice and it’s the management department’s job to make that happen.”

Although some people may see Kim as lucky for having gained success in just five years, he previously worked in entertainment circles for more than a decade.

“K.Will debuted in 2007 as soon as we established the company. We didn’t want to give him vocal lessons, as he already had a distinctive color in his voice that we didn’t want to standardize.”

According to Kim, although K.Will wasn’t “as handsome as other artists in boy bands, he was able to steadily receive attention from the public as a talented singer.”

After producing K.Will, Kim says his agency became known as a company that focuses on “singing ability,” and he liked the concept.

So his next goal was to produce a girl group who could “really sing.”

As Starship’s image was so singing-centered, it is hard to imagine six-member boy group Boyfriend in the agency’s stable.

But Kim says as the agency’s image seemed too “absolute” and he wanted to make a statement that he could target teenagers by using “good looks.”

“Honestly, I thought about launching Boyfriend as a boy group targeting overseas markets with a ‘pretty boy’ concept,” he says. “Japan, where pretty boys are especially popular, was a good place to start.”

The group signed a contract with Japanese management agency Being and announced its official debut in April. The performance at the Nippon Budokan in Japan on June 30 attracted more than 40,000 fans, breaking the record of Girls’ Generation, which drew 25,000 fans over three performances.

Boyfriend skyrocketed to the top of the Oricon chart in August with its debut Japanese single “Be My Shine,” beating Super Junior’s “Sexy, Free and Single.”

From left: Boyfriend and K.Will

“Like I said, all my employees treat all artists and trainees as their children. We talk to them as often as possible and make them feel like they’re at home while they are in practice rooms or vocal training rooms.”

Usually, entertainment agencies hold a monthly assessment day to evaluate trainees. They have to sing and dance in front of their teachers. Starship began by following this conventional method, but soon abolished it.

“Most trainees and artists in Starship are very cheerful, bright and outgoing. Sistar, for example, is known to be outgoing and energetic. I didn’t like looking at such bright trainees being pressured to be evaluated in such a formal atmosphere.”

Instead of strict assessments, Kim decided to hold a “talent night” every Tuesday evening where trainees can show off anything they want to, from working with the stage lighting to choosing their own music.

“They now look like they are playing in the playground rather than being assessed. They can express whatever they want without boundaries,” Kim says. “Sometimes you need to treat them like students, but sometimes you need to give them some freedom.”

Although Kim created Boyfriend to be the agency’s pioneer in the Japanese market, Kim never really considered sending K.Will or Sistar abroad. But as K-pop draws international attention, Kim thinks the time may be right to expand Starship’s foreign presence.

“Sistar is already receiving a lot of love calls from America and Europe. We didn’t imagine this to happen so suddenly. The girls are learning English from a native speaker, and Sistar will probably hold an overseas concert next year.”

Still, he prefers caution, taking it one step at a time.

“Going for a new market needs to be done carefully. The major entertainment agencies like SM, YG and JYP made so much effort to establish the K-pop culture, entering Japan, America, Southeast Asia and Europe when K-pop wasn’t as popular as it is today,” he says. “We must not ruin such effort and thoughtlessly enter into the overseas market just because it’s the trend.”

Starship signed a contract with Kim Na-yoon, one of the final contestants from “K-Pop Star” on SBS, in July as the 18-year-old can not only sing, but also is fluent in English. Kim lived in the United States until coming to Korea to participate in the competition.

“We now believe that being able to speak another language helps K-pop stars to obtain more opportunities abroad,” says Kim, citing Psy’s recent popularity as an example. “If Psy couldn’t speak English, I don’t think he could’ve made it that far, doing interviews and appearing on live shows.

“After looking at Psy’s success, I thought such a door of opportunity could open in front of Starship artists. We have to be ready to grab that opportunity.”