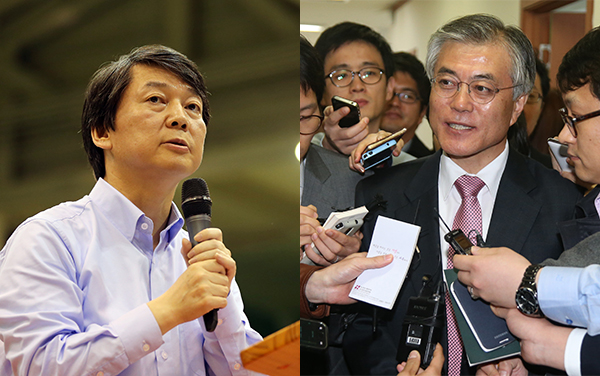 
Moon Jae-in, presidential candidate of the largest opposition Democratic United Party, and independent contender Ahn Cheol-soo will meet today to talk about the process to merge their bids and decide who will run as a unified liberal candidate in the Dec. 19 presidential election.

Ahn finally stopped playing hard to get and proposed to Moon to sit down for a one-on-one talk. And Moon accepted it, Ahn’s spokeswoman Jeong Yeon-sun said.

During a lecture at Chonnam National University in Gwangju yesterday, Ahn made public his hope to meet Moon. “I want to meet with Moon first,” Ahn said, “and to share values and philosophies with each other and agree with political reform.”

The Moon-Ahn meeting will be the first step for the liberals’ strategy to pick one candidate to counter the conservative Saenuri Party’s Park Geun-hye. The meeting is expected to rock the political arena with 44 days left before the presidential election.

“Ahn responded positively to Moon’s proposal made [Sunday],” Woo said. “We welcome it and accept his request.”

Ahn’s proposal appeared to be in response to Moon’s latest offer. On Sunday, Moon pressured Ahn to begin the candidacy consolidation process as soon as possible to ease the growing public concern about the delay.

“Let’s present the principle to the people that we will join forces to fight in the presidential election,” Moon said Sunday at his campaign chapter launch committee for Seoul and the capital region. “Let’s put all the options on the table and begin the discussion. I won’t insist on the timing and method that are advantageous to me.”

It appeared that Moon was hinting at the possibility of accepting the method of using an opinion poll outcome to decide the final contender.

While Ahn said earlier that he wanted to focus on making policy pledges until Saturday, pressure has grown from Moon and the Democratic United Party that the process should begin sooner. By proposing a one-on-one meeting to Moon yesterday, Ahn appeared to have decided to speed up the process.

“Talking about the method of consolidation when both of our pledges are not even completed is insincere,” Ahn said yesterday at the lecture. “That will take away the touching effects of the consolidation. One plus one won’t make an even two in that case.”

Ahn also hinted yesterday that he was stepping away from the argument that an independent president is capable of bringing changes to the country. “I know very well that I cannot complete the tasks of presidential victory and political reform alone,” Ahn said. “To replace the old with new, we must put together our forces.”

Ahn also made clear his animosity toward the Saenuri Party and pledged to stop the ruling party from winning another presidency.

Park yesterday reacted calmly about the announcement of Moon and Ahn’s plan to meet. “I don’t have much to say about it,” she said.

The Saenuri candidate then said she will announce her political reform plan today, but denied speculations that it will focus on a constitutional amendment to end the current single, five-year presidency.

The Saenuri Party tried to downplay the significance of the Moon-Ahn meeting.

He also said it is nothing special for Moon and Ahn to agree on a meeting. “It’s nothing like meeting with the North Korean leader Kim Jong-un,” Lee said.

“What’s so difficult about them to meet? Even if they do, they are meeting to go after power, not to fulfill the people’s desires or to resolve the challenges of our time.”

As the negotiation between Moon and Ahn became imminent, the Saenuri Party appeared to focus its attacks on Ahn, perhaps an indication of its assessment that Moon would be an easier rival for Park to beat.

“Ahn said the plan to build a naval base on Jeju Island had procedural flaws,” said Representative Chung Mong-joon during a campaign strategy meeting. “But the Supreme Court has ruled in favor of the project. Is he denying the rule of law or is he simply ignorant?”

Another official, Representative Chung Woo-taik, said Ahn was slyly dodging any verification of his abilities. “Ahn is reluctant to have a one-on-one debate against Moon,” he said.

“He also refused to participate in other debates. He wasted one year to decide whether he will run or not and dodged verification, and he is still doing so.”