Taxi drivers turn up heat so drunk travelers pass out

Taxi drivers turn up heat so drunk travelers pass out 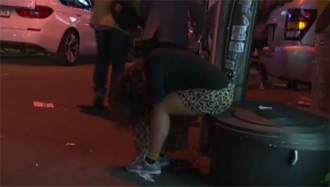 The police busted nine taxi drivers for stealing smartphones from heavily intoxicated customers, sometimes by turning up the heat in their vehicles so potential victims were more likely to pass out.

The Seoul Gwangjin Police Precinct said yesterday they arrested a 48-year-old cab driver surnamed Yun for stealing phones from drunk passengers who got in his taxi near Hongik University in Mapo District and Gangnam Station in southern Seoul, where many young people and businessmen go to have drinks.

The police also booked eight other taxi drivers on the same charge without physical detention.

According to investigators, the nine taxi drivers formed a so-called “Hongik University Group,” in February of this year and monopolized the waiting line for taxis at the front gate of Hongik University in a bid to target wasted passengers.

The nine culprits rotated turns taking drunks in their cars and attempted to steal their phones.

“They improvised turning up the heat so already drunk passengers would fall asleep,” said a police officer.

The drivers would wait until the inebriated passengers were fully passed out, pull over and then rob them of their phones.

The police said the nine suspects also instantly turned off mobile devices left by passengers in their cars and sold them to brokers.

Suspect Yun is also accused of allegedly purchasing 18 smartphones from his eight accomplices from July to October of this year, worth around 15 million won ($13,745) in total, and sold each stolen gadget for 300,000 won to brokers.

“The nine suspects specifically targeted people under heavy influence of alcohol to carry out the thefts,” said Kim Gye-dong, director of the violent crime division at the Gwangjin precinct.

The police added Yun had a sock hung on his knee pad inside his pants that he wore with the purpose of putting stolen smartphones there so he could evade a police search when they arrested him.

There were three smartphones found inside the sock when the police busted him on Oct. 27.

Authorities are now investigating where the stolen mobile gadgets ended up and are warning people against illegal activities by taxi drivers as there could be more cases of theft involving taxi drivers.

“The nine suspects committed the crimes as they were very aware of large amounts of money they could earn from stealing smartphones from passengers,” said Kim of the Gwangjin precinct.