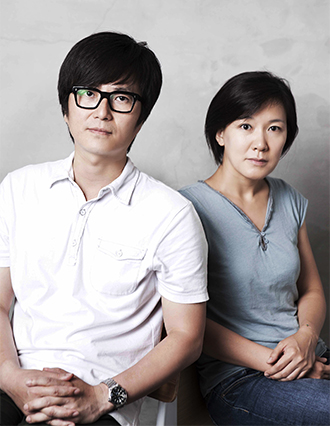 Jeon Joon-ho, left, and Moon Kyung-won. Provided by the NMOCA

Moon Kyung-won and Jeon Joon-ho have been named winners of the first annual “Korea Artist Prize,” co-sponsored by the National Museum of Contemporary Art (NMOCA) and the SBS Foundation, for their collaboration project titled “Voice of Metanoia.”

The museum said on Monday that a five-judge panel selected the Moon-Jeon duo from the four nominated teams that are currently showing their works at the 2012 Korea Artist Prize Exhibition at the museum’s headquarters in Gwacheon, south of Seoul. They will receive priority for participation in overseas exhibitions held by the NMOCA and their works will be collected by the museum or the SBS Foundation.

Moon and Jeon, both 43 years old, have been collaborating the past few years on the question “What can art do for society?” they said in recent interviews.

The first fruit of their collaboration was “News From Nowhere,” a project encompassing videos and installations. The duo presented the work at Germany’s Kassel Documenta, one of the world’s biggest contemporary art shows, earlier this year.

The duo’s follow-up project is “Voice of Metanoia,” which is on display in the ongoing show at the museum. It also consists of various genres of art, including video and performance.