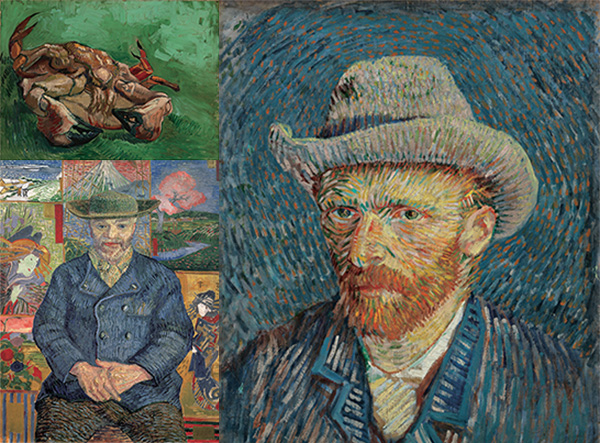 The “Van Gogh in Paris” exhibition, which starts tomorrow at Seoul Arts Center, will present 60 oil paintings. Counterclockwise from left, “Pere Tanguy,” 1887, from the Musee Rodin in Paris, “Self-Portrait with Grey Felt Hat,” 1887, and “A Crab on Its Back,” done in Arles in 1889 and held by the Van Gogh Museum in Amsterdam. Provided by the exhibition organizers


Is there a painter whose work has been more popular or life more familiar than Vincent van Gogh?

The Dutch artist, who cut off his ear, has long inspired writers, filmmakers and musicians around the world.

The 1934 biographical novel “Lust for Life” by Irving Stone was based on van Gogh. In 1956, it was adapted into a movie starring Kirk Douglas as van Gogh and Anthony Quinn as Paul Gauguin. The film was nominated for four Academy Awards.

Who could possibly forget the opening lyric “Starry starry night” in the 1971 song “Vincent” by Don McLean?

The late rapper Tupac Shakur wrote a poem titled “Starry Night” and in the 1970s Leonard Nimoy created and starred in “Vincent,” a one-man play based on an earlier play by Philip Stephens.

Van Gogh is everywhere worldwide and next spring a big part of him will be here in Seoul.

The show titled “Van Gogh in Paris: A Dialogue with Modernism,” focuses on the artist’s two years in Paris from March 1886 to February1888. Most of the 60 oil paintings on display, including “Pere Tanguy” and “Self-Portrait with Grey Felt Hat,” were done during this period.

Although van Gogh’s most popular masterpieces, “Sunflowers” and “Starry Night,” were done in Arles (1888-89) and Saint-Remy-de-Provence (1889-1890), his time in Paris is considered to be important by art historians because it was when he found his unique style.

“Living in Paris gave him an opportunity to experience Impressionism and interact with avant-garde artists,” says Seo Soun-jou, who directs the exhibition. “The year 1886 in Paris was a springboard for him. He transformed himself from a realist into a leading contemporary artist ahead of his time.”

Seo also directed the 2007 van Gogh retrospective at the Seoul Museum of Art, which attracted a record 820,000 people.

Before arriving in Paris from the Netherlands, van Gogh’s paintings were dark-toned and realistic. In Paris, his style changed dramatically, with the use of bright colors, bold strokes and flat color without shadows.

“Pere Tanguy” shows the artist’s fascination with Ukiyo-e. This painting is a portrait of Julien Tanguy, a Parisian art dealer who supported young artists and was nicknamed “Pere” (“Father”). In the background are several Japanese prints, including one of Mount Fuji.

Later in Arles, van Gogh wrote a letter to his brother, Theo, “I envy the Japanese the extreme clarity that everything in their work has. Their work is as simple as breathing, and they do a figure with a few confident strokes with the same ease as if it was as simple as buttoning your waistcoat.”

The Seoul exhibition also contains nine self-portraits. “It is a rare case that so many of van Gogh’s self-portraits are exhibited in one place,” Seo says. “He painted about 36 self-portraits, 27 during his Paris period, partly because he was too poor to hire a model.”

Among other paintings on display from van Gogh’s Paris years are “In the Cafe: Agostina Segatori in Le Tambourin” and “Cafe Table with Absinthe,” which give a glimpse of the mood of the Paris cafes where young and poor artists gathered.