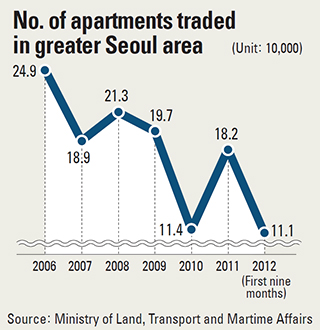 A 31-year-old office worker surnamed Kim who is set to wed in February has had no luck?apartment hunting due to exorbitant jeonse, or long-term housing deposit prices -- another sign of the travails afflicting Korea’s long-stagnant property market.

Jeonse prices for small apartments in Bangbae, a well-to-do district in southern Seoul that Kim has set his eyes on, jumped from 200 million won ($183,370) to 250 million won in just a month.

To find a target within his price range he switched his attention to neighboring Songpa but came across a similar situation and ended up ditching his ambition of living in one of southern Seoul’s wealthier districts.

He is now searching in Hanam and Bundang in more remote Gyeonggi.

“I hear that jeonse prices are likely to go up even more next year, so I have to find a place before January,” he said.

Experts say renters must rush as the supply of available apartments could soon drop to its lowest level in 22 years as more people sit tight and renew their contracts and potential buyers remain deterred by the threat of perpetually sinking prices. 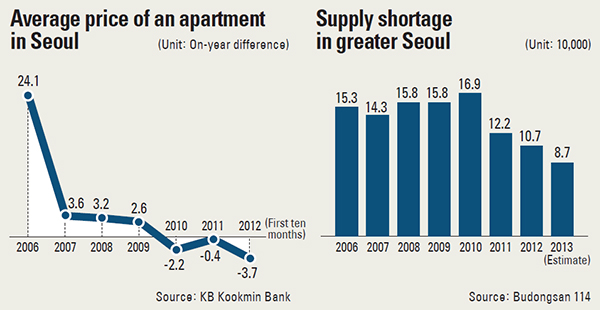 According to Budongsan 114, which offers real estate information, only 86,942 apartments will become available in the greater Seoul area next year.

This year roughly more than 100,000 apartments are estimated to have been supplied. 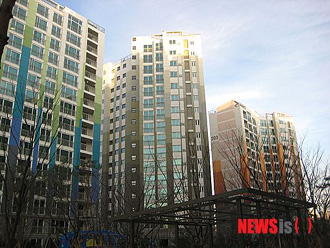 While 39,000 new apartments have been put up for rent each year on average in Seoul over the last five years, the number is expected to stand at 22,000 next year.


“Apartment supplies have been falling sharply since 2011 as construction companies, which have been struggling from selling mid-to large-size apartments between 2008 and 2010, have been hesitant to build housing units in the greater Seoul area,” said Kim Seon-deuk, head of Construction Industry Strategy Research.


According to industry estimates, roughly 200,000 new residential properties are needed every year in Seoul and its neighboring area to meet fresh demand, including housing for newlyweds and those who are relocating as their old complexes are razed and redeveloped.

With supply limited, apartment values are falling despite the government’s decision in September to offer tax cuts and exemptions for those who purchase new homes. This was done in hope of stimulating the frozen real estate market.

The government on Sept. 10 announced that it will exempt the tax levied when selling apartments for the next five years.

Only apartments that are purchased between Sept. 24 and Dec. 31 and valued less than 900 million won are eligible for the tax benefit.

Additionally the government is also offering a 50 percent cut on the tax levied when purchasing such apartment within this year.

The target of the tax cut was to boost trade.

On Monday, a 42-square-meter apartment in the affluent Gaepo District of Gangnam in southern Seoul, was put up for sale for 590 million won. Its price rose to 615 million won last month after the government announced its real estate tax cut.

“It looked at first as though apartment prices were creeping back up but they are now returning to their earlier [pre-exemption] levels,” said local realtor Kim Sang-yeol.

This marks the sharpest fall since June 2010. The situation was almost the same in Gyeonggi and Incheon.

“The government’s real estate measures had a very limited impact due to the recession,” said Park Deuk-bae, an analyst at Hyundai Research Institute.

“They don’t have the financial power to purchase an apartment.”

Kim Jae-eun, an analyst at Daewoo Securities, added that “people who have paid long-term deposits are keeping them because they suspect selling prices will fall further, so they can buy cheaper apartments if they wait.”

Some expect the situation to improve in the first half of next year after presidential elections in Korea, the U.S. and China mitigate global uncertainties and the euro zone gets a grip on its fiscal crisis.