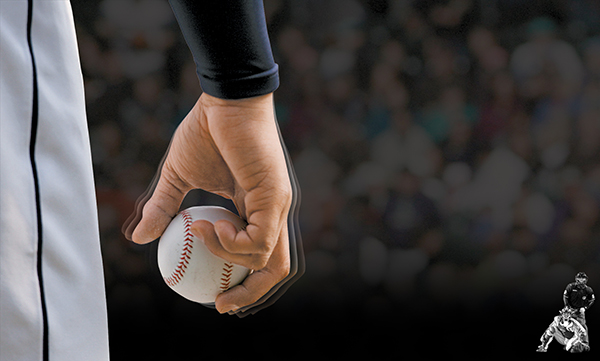 Kim Jae-hyo had been there from the beginning. The 31-year-old stocked up on maroon-and-white memorabilia and trekked out to Mokdong Stadium to cheer on his underdog Nexen Heroes, often referred to as the “moneyball” team of the Korea Baseball Organization.

The club moved to Seoul in 2008 after losing its Hyundai sponsorship, with Centennial Investments founding a new team called the Woori Heroes.

In 2010, the naming rights were sold to Nexen Tire, making the team the only ball club in Korea to not be sponsored by a top-20 conglomerate.

There was a lot of hype around the new team in town in 2008. Under Hyundai’s sponsorship, the franchise, called the Unicorns at the time, won the Korean Series in 1998, 2000, 2003 and 2004, becoming the most formidable club in the league almost instantaneously.

But losing the sponsorship exposed the importance of conglomerate support. Kim, after five disappointing seasons, has already stuffed his Heroes hat in the back of his closet, the deflated thundersticks under his bed a reminder of the league’s stark inequality.

“You are thrilled when a small team you are rooting for wins,” he said. “But I want my team to win not once, but consistently. I am tired of waiting to see that happen.” 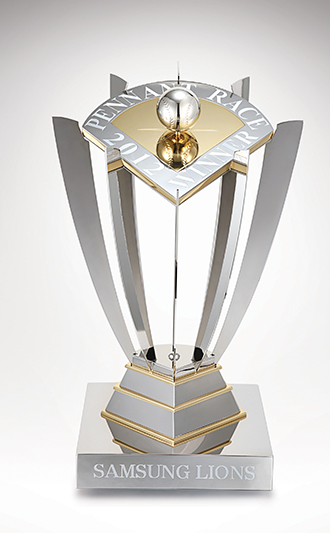 The KBO has just wrapped up the 2012 season, another one for the history books after reaching the seven-million attendance mark for the first time. But some say the popularity of the sport is destined to wane with the same drama unfolding year after year.

It’s as if the playoffs are fixed from the start.

The SK Wyverns have played in six straight Korean Series. This is something no team in the 109 years of the Major League Baseball World Series has ever accomplished, not even Babe Ruth and the New York Yankees.

The Samsung Lions have now won back-to-back Korean Series titles and KBO pennants and have advanced to the postseason in four of the past five years, as have the Lotte Giants and the Doosan Bears.

Only one team except for the Big Four (Samsung, SK, Doosan and Lotte) has advanced to the playoffs over the same time period: the Kia Tigers.

The Heroes have never made it to the postseason since losing the Hyundai sponsorship. Another Seoul-based franchise, the LG Twins, last played in the playoffs one decade ago, when they finished the regular season in second place. Since then, they have finished no higher than fifth.

The Daejeon-based Hanwha Eagles, the last-place team in the 2012 season, have failed to play in the postseason since 2007 and have only won the Korean Series once, back in 1999.

It seemed as though this season may have been a turning point for the league in the early stages. The Twins started off strong, climbing to second place back in April, luring their old fans to Jamsil Stadium.

The Heroes also brought a gust of fresh air with an extraordinary winning streak. After eight consecutive wins, the club rose to the top of the standings in May, doing so for the first time in its five-year history. 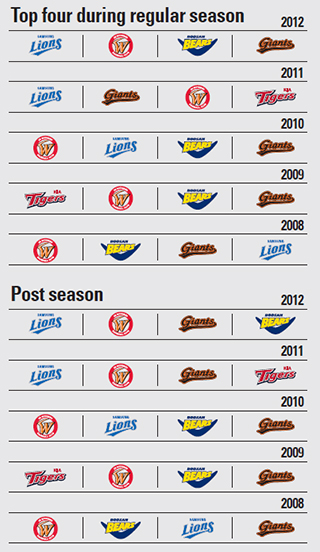 But the imbalance of power was restored as the season wore on. By mid-August, the craze at Nexen’s Mokdong Stadium was replaced with the familiar empty seats.

A total of 7,156,157 people went to games across the country during the regular KBO season this year, but two-thirds of that number, 4,790,305, was recorded in the first half, according to KBO statistics.

“In the early part of the season, some even said that eight million spectators would be possible,” said Ha Il-sung, a baseball commentator.

“The appeal of baseball is unpredictable, but as the outcome of the games became too obvious, people seemed to have visited the stadiums less frequently.”

What lies behind the inequality among the teams in the league is the growing gap in investment by sponsoring companies.

According to those with knowledge of the professional teams, running a baseball club requires 10 billion won ($9.2 million) to 30 billion won in investments each year, which typically result in short-term deficits.

This means only those companies that can afford to take short-term losses in hopes of long-term benefits from the promotion of their corporate image can manage baseball clubs. And the more money they have, the better players they get.

The Samsung Lions spent the most on salaries this year, paying an average of 117.7 million won per player, followed by the SK Wyverns at 114.0 million won and the Doosan Bears at 94.8 million won.

The Nexen Heroes spent 61.4 million won in 2011, increasing it slightly to 77.7 million last year to snag stars like Kim Byung-hyun, the two-time winner of the World Series.

There have been 17 ball clubs in the 31-year history of the KBO. Only two teams, Samsung and Lotte, have been financially able to support the clubs from the beginning.

In the early years of the KBO, the corporate influence was limited for the Haitai Tigers, sponsored by the confectionery manufacturer, who won the league’s title nine times including four straight wins between 1986 and 1989.

The investment by Haitai was modest compared to other big corporate-sponsored clubs such as the Samsung Lions, who only won one title in the first 20 years.

The Tigers’ dominance, however, began to crumble with the growth in investment by Samsung. The Lions began to bring players in bulk from the other teams in the late 1990s, in particular from the Tigers.

And they weren’t luring just players with fat salaries. They also brought in coaches from other teams. Kim Euong-yong, who had won all of the nine titles for the Haitai Tigers, took the helm of the Lions beginning in 2001 and led the team to win the Korean Series in 2002.

They also won the Korean Series in 2005 and 2006 under the management of Kim’s protege, Sun Dong-yul, who was an ace pitcher for the Tigers.

Observers said that Samsung’s money has strengthened the team further and two straight titles under manager Ryu Joong-il has hardly been surprising given the league’s best lineup and strongest rotation.

Heo Koo-youn, a baseball commentator, said that the strength of the other big-money clubs are also partly attributed to the systematic investment by their sponsors.

The Wyverns, who have won three of the last six Korean Series, largely owe their success to former manager Kim Sung-keun, who trained the players to master basic skills more rigorously than any other club. But Heo said that SK is supporting the systematic training program heavily.

He said the top four teams, led by the Lions, are in particular investing in better infrastructure and training. The Lotte Giants, among the worst clubs in the early 2000s, began to take off after building a practice stadium in Gimhae, a satellite city of Busan, in 2007. 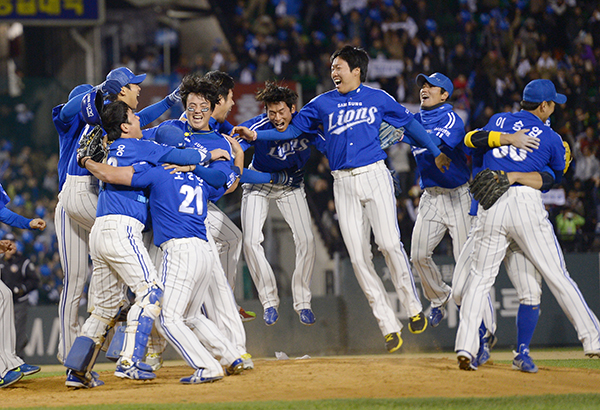 Samsung Lions players rush onto the mound of Jamsil Stadium to celebrate back-to-back Korean Series titles after beating the SK Wyverns 7-0 in Game 6. The Lions, along with the SK Wyverns, Doosan Bears and the Lotte Giants, have dominated the Korea Baseball Organization over the last several years. [NEWSIS]

The Eagles, for instance, boosted expectations before the season by bringing in valued players including Park Chan-ho, the winningest Major Leaguer pitcher from Asia, and Kim Tae-kyun, its franchise star from Japan. But they failed to compete and now are in a deeper hole in the long term.

KBO officials said the results would be more unpredictable next year due to several factors such as the expansion of the league.

The NC Dinos, a Changwon-based club, will make its debut as the ninth KBO club next season, and a massive transfer of players from the existing teams to the Dinos will begin soon. The release of free agents will also affect the balance.

But others think the extreme polarity is too deeply rooted to alter the course of the league.

“The standings in recent years are the cumulative outcome of investment strategies in preceding years and it will be difficult to see change overnight,” said Lee Hyo-bong, a baseball commentator.

“The lower teams will try to take over the big-money teams by bringing good players in from overseas or other domestic clubs and maybe that’s the only way they could do it. We will see.”