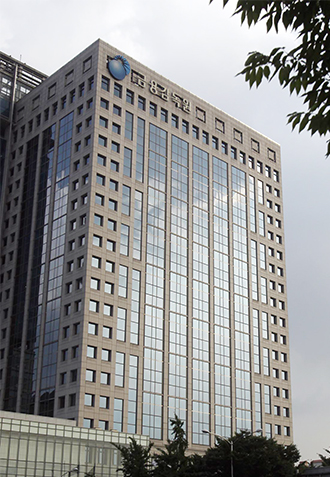 With less than 45 days before the presidential election, the debate over reorganizing the Financial Supervisory Service (FSS) has resurfaced with a vengeance.

After conducting research on the possible reform of the financial watchdog at the request of the Prime Minister’s Office, Jung Sun-seop, a professor of finance law at Seoul National University, suggested spinning off the FSS’ Financial Consumer Protection Bureau as an independent agency and merging this with the Financial Services Commission (FSC), the country’s top financial policy maker.

“The research was conducted so that it could be used as a guideline for the next administration when it revamps the financial watchdog,” said an official at the Prime Minister’s Office.

Such a merger would require changing the status of employees at the FSS to public servants, thus pitting them on par with officials at the FSC, the report said. Even though such a move would give the FSS more supervisory power, it has met with strong opposition from both agencies.

The FSS recently formed a task force led by Cho Young-je, its deputy governor of planning and management, to come up with countermeasures to the plan, according to market observers.

“Realistically, it would be impossible to change status of all the FSS’ 1,700 employees to make them public servants,” said a senior official at the FSS. “Our research also shows that it would cost 1 trillion won [$916.59 million] to spin off the bureau.”

The FSS is a financial supervisory body that administers public affairs and acts independently of the government. It works closely with the FSC.

There have been calls to revamp it and make its staff public servants since it was created in 1999 as the result of a decision to integrate four separate authorities governing banking, non-banking, securities and insurance. In 2000, the Ministry of Budget and Planning, the precursor to the Ministry of Strategy and Finance, said it would consider turning the FSS into a government organization. Four years later, the Board of Audit and Inspection again raised the issue but it was shot down.

Market observers say the time is now ripe for a massive transformation given that the FSS has been peppered with criticism for being too lax in its supervision of savings banks, many of which were last year due to bad management and cases of corruption. 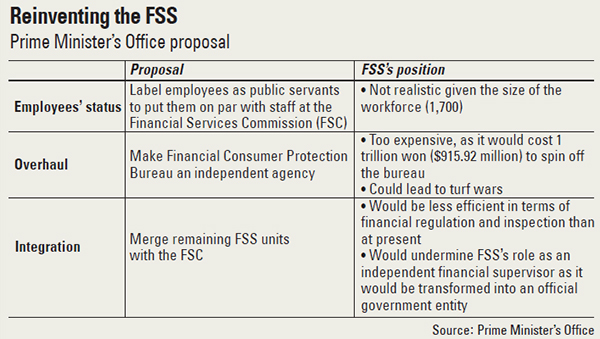 Many see the Financial Consumer Protection Bureau as being straitjacketed at present and express skepticism that bringing it under the wing of the FSC would serve much good.

“It should be made into an independent agency as its tasks at present are very limited,” said an industry source, who asked not to be named. “Under the control of the FSS, the bureau cannot raise its independent voice given that its goal - of protecting financial consumers - conflicts with the FSS’s main agenda, which focuses on monitoring institutions’ financial soundness.

Currently, only 6 percent of the FSS’ 1,700 employees work at the bureau.

Meanwhile, cynics say the real reason the FSS does not want to merge with the FSC is that officials fear their salaries would be cut as a result.

“Given that the global economy, including Europe, will suffer greatly, we need to enhance system that could stabilize the country’s financial market and its industry,” Kim said at a seminar hosted by the Financial Research Center for Korea. “It is appropriate for financial supervision to be included as a part of financial administration and the FSS’ Financial Consumer Protection Bureau needs to become an independent body.”

Market observers say Kim’s rare appearance at such a seminar highlights how the FSC is afraid any reform would weaken its influence.

The three leading presidential candidates have all said they support overhauling the financial authorities.