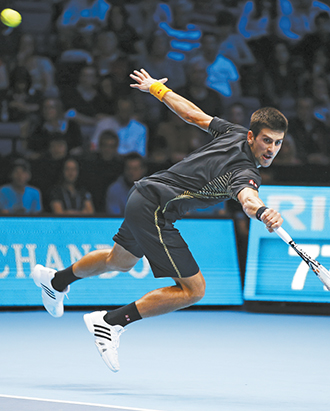 Novak Djokovic of Serbia returns a shot during the men’s singles Group A tennis match against Jo-Wilfried Tsonga of France at the ATP World Tour Finals in the O2 Arena in London. [XINHUA/YONHAP]

LONDON - Playing in his opening match at the ATP finals, Novak Djokovic dived right in.

The top-ranked Serb twice landed hard on the court Monday at the O2 Arena, but it didn’t stop him from beating Jo-Wilfried Tsonga 7-6 (4), 6-3 and setting up a Wednesday showdown with Group A rival Andy Murray.

Djokovic entered the season-ending tournament after losing in the second round of the Paris Masters last week. Despite describing himself as being physically down in that loss, the Australian Open champion showed no signs of fatigue against Tsonga.

But he did struggle to impose his game on his French opponent, who had three break points in the first set but missed out on all of them.

“To be quite honest, he was the better player throughout the first set,” said Djokovic, who broke Tsonga twice in the second.

Djokovic and Murray have played a few epic matches this year, including a five-set Murray win in the U.S. Open final.

“When I’m playing Andy, I need to be ready for long rallies and a physically demanding match,” Djokovic said. “So I’m going to have a day tomorrow to recover and get ready for next challenge.”

The ATP finals is the season-ending tournament for the top eight players in the world. Fourth-ranked Rafael Nadal, however, pulled out because of injury.

Group B, which includes six-time champion Roger Federer, will play Tuesday at the O2 Arena.

The third-ranked Murray needed a wake-up call in the early match before beating Berdych 3-6, 6-3, 6-4, and he got it shortly after failing to convert his 10th break point.

Murray missed all seven of his break chances in the first set, and then wasted three more in the fourth game of the second set.

After the third, he whacked the ball in anguish, but even that failed to make it to the other side of the court, clanging off the sponsor sign hanging on the net.

Berdych then put a forehand wide, and Murray finally earned the break he needed to take the second set when his Czech opponent’s forehand sailed long, making it 3-1.

In the third set, Murray didn’t waste his only opportunity. He converted the one break point he earned in that final set to take a 2-1 lead, and then lost only three points on serve the rest of the way.

“Indoor matches - when both of us, I thought, served pretty well, weren’t losing too many points on our first serve - it can hinge on a couple points here or there,” Murray said.

Murray was playing in Britain for the first time since ending the country’s 76-year wait for a men’s Grand Slam champion. Although he reached the Wimbledon final and won the gold medal at the London Olympics, no British man had won a major tennis title since Fred Perry in 1936.