[INTERVIEW] Laying a firm foundation for cooperation in Northeast Asia

[INTERVIEW] Laying a firm foundation for cooperation in Northeast Asia 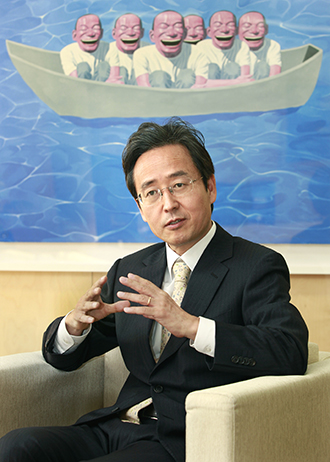 Korea, China and Japan are in basic agreement that bilateral conflicts over historical and territorial issues should not affect trilateral cooperation in Northeast Asia, according to Shin Bong-kil, secretary general of the Trilateral Cooperative Secretariat (TCS), a Seoul-based international organization that was established last year.

“It’s true there are difficulties involved [in running the secretariat] due to conflicts that have arisen among the three cooperating countries,” Shin said in an interview with the Korea JoongAng Daily last week to discuss the anniversary of the TCS’s launch. “When the secretariat was established, problems involving history and territory weren’t as serious as they are now.”

The trilateral body was established on Sept. 1, 2011, with an aim to promote peace and prosperity in the region, similar to the mandate of the European Union or the Association of Southeast Asian Nations. President Lee Myung-bak first proposed setting up the organization during a summit in Beijing in 2009.

Shin, a seasoned diplomat, was appointed last year to take the helm of the secretariat for two years.

This year, tension has grown in Northeast Asia as Korea, China and Japan are engaged in a range of diplomatic rows. China and Japan are involved in a dispute over the Senkaku Islands, called the Diaoyu by the Chinese, in the South China Sea, while Korea and Japan are at odds over Dokdo, Korea’s easternmost islets, known as Takeshima in Japan. Conflicts over the three countries’ shared history - pertaining to Japanese imperialism, among other issues - have also bubbled to the surface.

Q. The secretariat recently celebrated its first anniversary. Could you give us a brief background of how the organization was founded?

A. We opened in September last year. But let me first explain the overall picture at the time, and several years beforehand. China was rising rapidly, but Japan was experiencing difficulties economically and politically because of the Fukushima nuclear incident in March of that year. Korea was also making great progress. The Northeast Asian region as a whole was becoming a focus of the global economy and politics, and in this context there was a need for the three countries to strengthen their cooperation to maximize their global influence. In 2009, President Lee Myung-bak proposed the idea of establishing a permanent secretariat to maintain a more sustainable partnership among the three. This is why the office of the secretariat is located in Seoul, not Beijing or Tokyo.

Were there any problems getting it started?

After the three countries agreed to establish a trilateral body in Seoul, I was recommended by Seoul to the Chinese and Japanese governments to be its first secretary general.

There were many difficulties in the first phase. Usually, the host provides the budget needed to open an office. But when I visited the ministry that deals with such financial matters, and explained to them the basic idea of establishing the trilateral body in order to receive from them some financial support, they did not take it seriously and were not interested. I wanted independent office space, but at first the Finance Ministry recommended I use an empty room inside the Institute of Foreign Affairs & National Security building.

Even though the leaders of the three countries had agreed to establish the organization, there were difficulties in actually opening an office in Korea. After much persuasion, we managed to open a decent office in central Seoul.

How is the secretariat managed?

By board members, including one secretary general and two deputies. We also have a few dozen staff members.

The secretary general seat is held for two years on a rotating basis among the three countries. When my term ends next year, the post will be taken by a Japanese, with the deputies coming from the other two countries.

Currently, the two deputy secretary generals that I work with are from Japan and China. The budget for running the secretariat is divided into three. The employees are also divided equally among the three foreign ministries. We now have about 30 employees.

What have you accomplished so far?

I would say that one of the accomplishments is that the TCS has, for the first time, set a foundation for regional cooperation in Northeast Asia. It is the first time in history that a secretariat involving the three governments has been formed. We have successfully launched the organization, which I consider one of the accomplishments. For example, you can look at it like a company with three joint investors that has successfully prepared to launch an initial public offering.

Another accomplishment would be that we have publicized to the people of the three countries our vision of trilateral cooperation. We have created a sense of community and solidarity. We have played a role in raising Korea-China-Japan cooperation as the most important agenda among each of the countries’ diplomatic efforts.

Despite these accomplishments, I assume there have also been some shortfalls or difficulties. What role should the secretariat play to cool rising tensions in the region?

It’s true there are difficulties involved [in running the secretariat] due to conflicts that have arisen among the three cooperating countries. When it was established, problems involving history and territory weren’t as serious as they are now.

There can always be bilateral problems. But even if bilateral ties break down because of these problems, we now have another bridge - the TCS - which can mend the relationship.

All three countries are expecting leadership changes. How could these affect the secretariat?

The next 10 years will be a very important period for all three sides. Korea, China and Japan will focus on trying to make themselves the center of world affairs economically, militarily and politically.

At the same time, there will be many challenges for the three nations. China has witnessed rapid growth, and there will be problems in the years to come as a result of its rapid development. Korea will also experience many social conflicts within its own borders, and rampant nationalism could become an issue for Japan. What I can say for now is that, whoever comes to lead each of the three countries, he or she will continue to acknowledge the importance of strong trilateral cooperation.