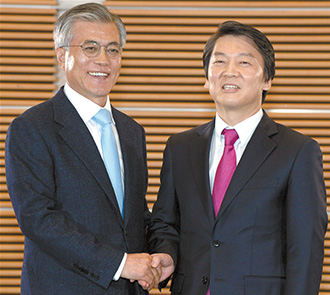 Moon Jae-in, left, presidential candidate for the opposition Democratic United Party, and independent Ahn Cheol-soo pose for reporters yesterday before the two candidates have a one-on-one meeting to discuss unifying candidacies at the Kim Koo Museum and Library in central Seoul. [NEWSIS]

Presidential candidates Moon Jae-in and Ahn Cheol-soo yesterday had their first meeting to discuss who should stay in the race - and who should bow out.


They agreed to consolidate their campaigns by Nov. 25-26, which is the candidate registration deadline, but didn’t agree on how to accomplish it.

Moon, presidential candidate for the opposition Democratic United Party, and independent Ahn held a meeting at the Kim Koo Museum and Library in central Seoul at 6 p.m. They met behind closed doors for one hour and 15 minutes without aides.

After the meeting, the two candidates briefed their spokesmen, who announced a seven-point agreement.


While the agreement didn’t include a specific method of how to pick the presidential candidate, Moon and Ahn agreed to complete the process before Nov. 25-26. 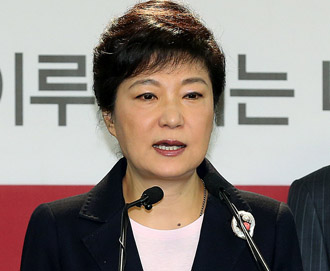 According to their spokesmen, Moon and Ahn agreed to the need to unite their supporters and to create a joint declaration on the direction of policies for political reform and presidential victory. Moon and Ahn stated clearly that they shared the goal to stop the ruling Saenuri Party from winning another presidential victory. They also said they’d work together to get polling hours extended on voting day in December, which the ruling Saenuri Party is resisting.

Both Moon and Ahn have declared candidacies, but they know they will split the liberal vote if both stay in the race, almost certainly giving the election to conservative candidate Park Geun-hye of the Saenuri Party. Before the meeting yesterday, both took steps to reinforce their campaigns to have stronger negotiating positions.


Ahn gave a short comment after Moon. “I will do my best to make today’s meeting the first step toward a new type of politics that attends to the people’s livelihoods,” he said. “I will not forget the people’s desire for new politics and changing the administration.”


The meeting came only six weeks before the Dec. 19 election.

Some analysts think time is running out for a runoff primary, and the only choice would be an opinion poll or a straight-out deal, with the loser being promised a position like prime minister.

“When I meet him today, I will propose to him that we should discuss the specific plans and time to achieve candidate consolidation in addition to the talks to share policies and values,” Moon said in a meeting with young voters in the afternoon. “Candidate consolidation shouldn’t stop at picking one candidate to run and making the other accept the outcome,” Moon said. “It should be a process to create a united force with the supporters of the DUP and Ahn to reform the party, change politics, and achieve economic democratization and better welfare.”

Earlier in the morning, Moon also announced measures to reform the DUP, including a plan to devolve power from the central leadership to provincial and city chapters around the country. At a meeting of his campaign’s New Politics Committee, Moon said the party will give up the power to pick nominees for elections.

Moon said an overhaul of the nomination process will largely reduce the power of the central party leadership, which can concentrate on policy making. He said it will also reform the party leadership election system and end factionalism.

Ahn yesterday addressed rivals’ attacks on his inexperience in politics by announcing an advisory group of 24 prominent figures, including former ministers and vice ministers, retired generals, and other experts.

The independent candidate held his first meeting with the advisers in the morning.