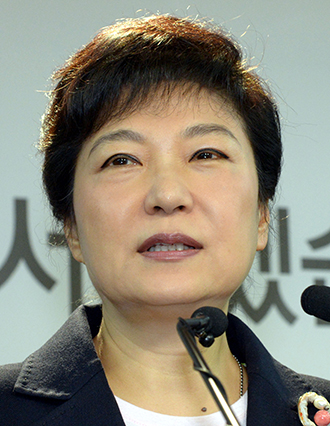 Park Geun-hye yesterday announced a road map to political reform that would change the election law to require parties to choose a presidential candidate at least four months before an election - a slap in the face of her competitors, who are still negotiating who will run to represent the liberals.

Park made public a series of reform ideas at the Saenuri Party headquarters, which was carried live on television.

“Because political parties have selected candidates tardily, it became fundamentally impossible to have an election based on competition of policy pledges,” Park said. “And the people were deprived of the right to know the candidates and make a choice.”

Park said the ruling party will change the election law to require a political party to finalize its candidate in a presidential election four months ahead of the vote.

For legislative elections, parties will be required to choose candidates two months in advance.

Park is obviously targeting rivals Moon Jae-in of the opposition Democratic United Party and independent Ahn Cheol-soo, who started negotiations yesterday on who will be the single liberal candidate, six weeks before the election.

But many analysts were expecting more radical reform pledges.

Park also reiterated her party’s earlier promise that lawmakers will give up a long-held privilege: immunity from arrest while in office.

The immunity from arrest was a feature of Korean political life that dates back to dictatorial rule. It helped prevent dictators from arresting political foes on trumped-up charges.

Park also promised reform of the candidate nomination process of the Saenuri Party.

She said she would end the party’s role in nominating candidates in local elections, which can be done through primaries, and overhaul the legislative election nomination process for both geographic constituencies and proportional representatives.

She also promised to end people paying bribes to get nominations in elections. When a case is discovered, she said, both the candidate and the person who received the bribe will be ordered to pay more than 30 times the amount of the bribe as a fine. She also promised to deprive them of the right to hold public office for 20 years.

Park also wants to give more authority to the prime minister to confirm the appointment of cabinet members and guarantee ministers the right to appoint their senior officials.

She promised that if she is elected president, she will give a speech in the National Assembly every year to demonstrate her respect for the legislature.

“I think it is undesirable to approach that issue as a strategy to win the presidential election,” Park said.

With the political reform promises, Park is trying to clean up the corrupt image of the conservative ruling party. “Wrong politics is the true obstacle hindering the people’s happiness,” Park said. “With unswerving determination, I will put an end to all the wrong practices.”

She also reiterated an earlier pledge to form a more transparent administration by appointing a special inspector to investigate corruption by the family of the president and his or her associates. Most of the pledges had been discussed by her political reform special committee in the past.

Speculation was high that she would announce more radical measures such as ending the current leadership system, including the party chairman position and the Supreme Council.

Park also launched an indirect attack at Ahn, who trumpets his own lack of experience in politics as a virtue. “We cannot live without politics although we are disappointed with it,” she said. “The goal of political reform is not to kill politics but to restore it and make it perform its proper role.”

Yoo Min-young, Ahn’s spokesman, said that Park’s reform plan was “meaningful yet she actually needs to act on it.”