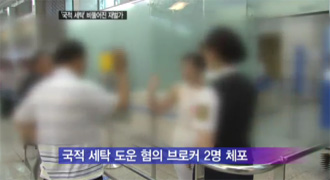 Korean parents are known for going to extremes to give their children the best possible education - even if it means forging application documents, including passports, and spending 100 million won ($91,700) on admissions brokers for their children to enter elite foreign schools.

Another 46 other parents, including those connected to chaebol, were indicted without detention for falsifying documents. Prosecutors are on the lookout for two additional brokers from South Chungcheong.

Prosecutors began a crackdown on admissions fraud in August after allegations that parents - the elite of society, including government officials and business leaders - sent their children to top foreign schools with fake passports and forged admissions documents.

To be enrolled in foreign schools, a student has to be non-Korean or have at least one foreign parent under Korean law. However, up to 30 percent of students at these schools can have two Korean parents if they have spent at least three years abroad. Schools designated as international don’t follow the same regulations.

But parents with Korean nationality have found ways to circumvent the quota. In 2009, Kwon hired a broker who forged a Bulgarian passport to send her daughter to a foreign school in Seoul. Prosecutors said that she was charged with further using the broker to forge another passport from Guatemala, which she used to transfer her daughter to another foreign school in Seoul.

Kwon, who married into an influential Chungcheong-based business, spent some 100 million won on the broker. Other parents professed to spending between 50 million won and 100 million won on brokers who specialize in forging admissions documents. Many of the parents went to Central or South American countries, such as Guatemala, for several days, and through the brokers filled out citizenship applications there. Then, they gave up Korean nationality in order to obtain foreign nationality for their children to attend foreign school here.

Some parents didn’t even visit the country that they acquired citizenship from and through a broker obtained a passport from countries in Africa, including Sierra Leone, and didn’t give up their Korean citizenship. Instead, they submitted copies of only the foreign passport for the application.

Prosecutors found 53 students were enrolled through fraudulent admissions at nine foreign schools, six of which were based in Seoul and the rest in Incheon, Gyeonggi and Daejeon.

There were four chaebol family-related cases, and other cases involved the offspring of executives, doctors and politicians.

Prosecutors further stated that they requested the Ministry of Education, Science and Technology improve guidelines for admissions to foreign schools, and that regular inspection and audits become routine.

“I have several friends on waiting lists to send their children to kindergarten at foreign schools,” said one mother, surnamed Kim, who has an 8-year-old son enrolled in a Seoul-based foreign school. “There are mothers that hide their pregnancies and go on a plane when they are in their last trimester to have their child abroad to give their child foreign citizenship. It is a mother’s instinct not to want our children to be disadvantaged.”