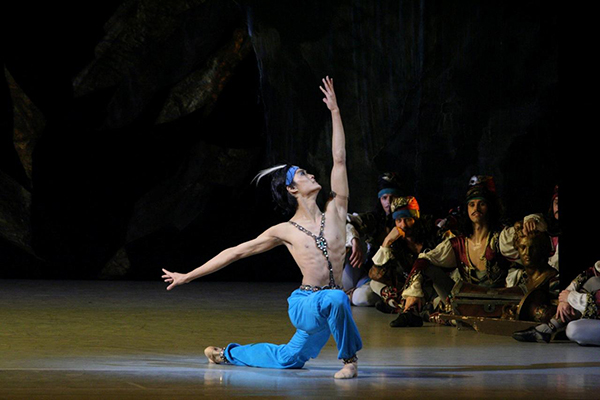 “I think I have the worst physique for a dancer. Thankfully, I was born tall, with long legs and arms, but I am bowlegged, I have protruding knees and no arches. I think that’s why many people told me to quit ballet. Now that I think about it, it makes me mad,” Kim says, half joking.

Despite such “flaws,” Kim is the first Asian to join the prestigious Mariinsky Ballet Company of St. Petersburg, Russia, his goal since he was in elementary school. He is also one of three foreigners (the others are American and British) among about 200 dancers in the company.

Mariinsky Ballet is a classical company based at the Mariinsky Theatre and founded in the 18th century as the Imperial Russian Ballet. It’s the parent company of the Vaganova Ballet Academy. According to Kim, most of the Mariinsky dancers are from the academy and it is rare that an outside dancer gets into the company through an audition, like Kim did.

Two months after landing his dream job last November, Kim was chosen for principal roles in both “Le Corsaire” in January and “Don Quixote” in February. The roles allowed Kim to be noticed in Russia, the stronghold of classical ballet.

“For the first couple of months of my stay in Russia, people asked me if I was Chinese. When I said no, they asked if I was Japanese. When I said no again, they then asked where I was from rather than asking me if I was Korean,” said Kim. “But after I did the two performances early this year, people started recognizing me as ‘the Korean boy in Mariinsky.’?”

Kim says he is proud of promoting Korea in Russia and said it is his duty after receiving special exemption from the two-year compulsory military service for winning an international ballet award.

Kim will perform “Swan Lake” with the Mariinsky Ballet Company at the Sejong Center for Performing Arts in central Seoul on Monday and Tuesday. He will perform as Prince Siegford on the second day of performances. But before he graces the stage, he chatted with the Korea JoongAng Daily in September during a month-long visit to Seoul. 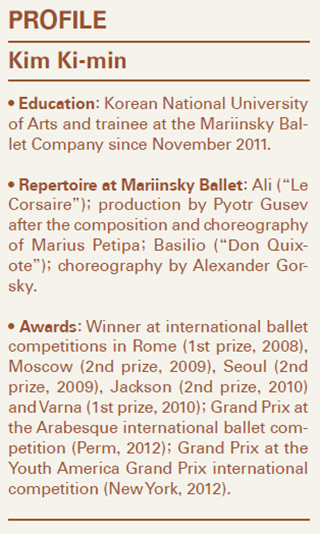 Q. Most young Korean boys learn Taekwondo rather than ballet. How did you begin dancing?

A. I actually started learning ballet thanks to Taekwondo. Of course I went to Taekwondo classes as a young boy. And one day, when I was around 8, my Taekwondo teacher invited all the parents to watch our show. My part included a little bit of dance with Taekwondo moves and I guess that’s when my mother took notice of my talent in dancing. But when my mother first suggested that I go to a ballet class, I felt ashamed because you have to wear tights. And I was the only boy in class.

But one ballet performance that I watched when I was a fourth grader changed everything. It was “The Sleeping Beauty” and after the performance, I was in tears. I didn’t know anything about the story or the ballet but I think I was so moved by it I was just crying and crying. For several weeks after watching the performance, I kept on seeing images on my bedroom ceiling whenever I lay down to go to sleep. I knew I wanted to become a ballerino so that I could allow others to feel what I felt that day.


You said that when you were young, the harshest punishment you received from your parents wasn’t getting spanked or getting grounded, but was forbidding you from going to ballet classes.

Yes. When I didn’t listen to my mother, she always said that I wasn’t allowed to go to ballet classes. That was the cruelest punishment for me. Also, when I was a fifth grader, my family moved to Seoul from Chuncheon [Gangwon]. My brother was also learning ballet, so many people told my mother that she should only teach my brother and not me because it costs too much in Seoul.

So I was forced to quit ballet lessons. But I couldn’t give up. So one day after school, I took a two-hour train ride to Chuncheon without telling my parents. I arrived there at 6 p.m., went to my ballet class, danced until 10 p.m. and arrived back in Seoul at around midnight.

When I went home, it was quite a scene. My parents had called the police and I was in a lot of trouble. But from that day on, my mother allowed me to go to Chuncheon to learn from my teacher as it was less expensive than finding me a new instructor in Seoul. I don’t know how I did it, but every day after school I went down to Chuncheon to learn ballet for a year. 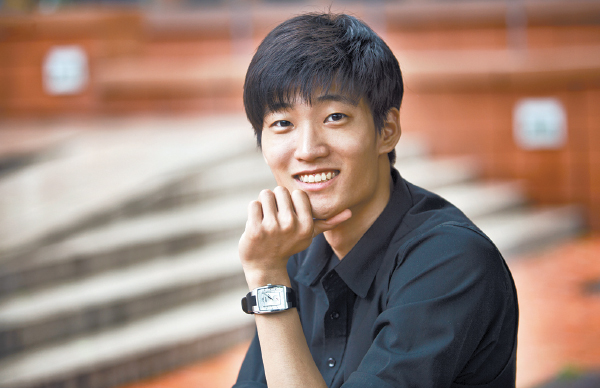 The Mariinsky Ballet Company will be staging “Swan Lake” on Monday and Tuesday at the Sejong Center for the Performing Arts. Kim Ki-min will be performing the lead role of Prince Siegfried on the second day. By Park Sang-moon


You said that joining the Mariinsky Ballet Company was your dream since you were in elementary school. Why?

I’ll have to talk about the characteristics of Mariinsky first. It’s one of the world’s greatest ballet companies and where Marius Petipa choreographed what we call the three best-known classical ballets of today, “Swan Lake,” “The Nutcracker” and “The Sleeping Beauty.” Mariinsky keeps the original choreography without any modifications as it stresses the importance of keeping the tradition. Mariinsky’s style focuses more on expressiveness rather than technique or visuals. I was fascinated by such characteristics as a young ballerino.

You said your body is not ideal for a ballerino. Has this hindered you in any way?

Well, it’s harder for me to master a move compared to others with the ideal figure, but I see such shortcomings as a stimulant. I know I have to try at least three or four times harder than others to be at the same level. Since I have loved Russian ballets ever since I started learning, I practiced really hard to dance like Russian dancers. I think that was why I caught the eyes of Yuri Fateyev, the artistic director of Mariinsky, when I auditioned in front of him in June of last year. I guess he thought, ‘This weird looking Asian boy dances like a Russian.’

You’ll be staging a performance as Prince Siegfried in “Swan Lake” in Korea for the first time in a year. How do you feel about the role?

It’s definitely making my heart flutter. I’ve been on many important international stages, but this Korean stage seems the biggest because I’ll be showing my family, friends and Koreans how much I’ve improved during the year in Russia. Usually before big performances in Russia, I boldly say to myself, I’m going to show them! I can do this! But in Korea, I become humble and cautious.

In Russia, you took lead, masculine roles in “Le Corsaire” and “Don Quixote.” But this time in Korea you’ll be playing Prince Siegfried in “Swan Lake.”

I know that I am better at those manly roles that require a lot of technique, but what I enjoy doing is totally the opposite. I love romantic ballets like “Romeo and Juliet.” I also enjoy classics like “Giselle” and “Swan Lake.” Thankfully, my teacher told me that my strength is that I can assimilate any role given to me. I’ve danced “Swan Lake” when I was 17 with the Korean National Ballet. It’s been three years and I think I can do a lot better job at expressing the character as I turned 20 this year, like Prince Siegfried.

If you take a look at the first act of “Swan Lake,” Prince Siegfried is happy to see his friends but feels lonely at the same time. He wants to do something but doesn’t know what that is. He feels sad when his friends leave and he misses them. I think I can express such a character now that I’ve experienced a similar fate of leaving Korea for Russia last year.

Since I am with a Russian ballet company, I want to become the top principal dancer in Russia. In Russia, ballet is part of the popular culture. Every time I go on a stage in Russia, I am moved not by my performances or my colleagues, but by watching the audience give a standing ovation and cheer as though they were so touched by the performance.

I hope ballet becomes as popular in Korea as it is in Russia one day. Of course it will take a long time but I hope there be many talented dancers in Korea. Most Koreans today know ballerina Kang Sue-jin and people come to watch her show. What if there were 100 dancers like Kang Sue-jin? Tickets for ballet performances would always sell out.