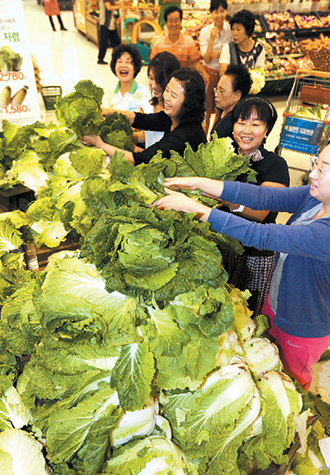 Shoppers at E-Mart’s outlet in Seongsu, northeastern Seoul, purchase Chinese cabbage yesterday ahead of kimchi-making season. Large discount stores are offering the leafy vegetable at huge discounts for a limited period to win over customers. [YONHAP]

Large discount stores are vying to undercut each other by halving their prices for Chinese cabbage, which is used to make the popular side dish kimchi, following recent sales competitions involving pork belly and hanwoo, or Korean beef.

The rivalry between E-Mart, Homeplus and Lotte Mart ahead of annual kimchi-making season is especially fierce this year as cabbage prices have surged on-year due to late summer typhoons hitting crops and a reduction of cultivation areas.

E-Mart, the nation’s largest discount chain store, said yesterday it has started taking pre-orders of Chinese cabbage from farms in Yeonggwang, South Jeolla, and Gochang, North Jeolla, at 1,200 won ($1.11) per head of cabbage on a first-come, first-served basis.

There are a total of 40,000 heads of cabbage available and each customer can purchase up to 18, E-Mart said, adding that they can be picked up from stores from Nov. 26-30.

The slashed price marks a reduction of 59.7 percent and is 53.3 percent cheaper than the wholesale price of cabbage at Garak Market, a large wholesale food market in Songpa District, southern Seoul, the retailer said.

As of Tuesday, one head of Chinese cabbage was selling for 2,980 won at E-Mart, and at 2,570 won at Garak Market. The retail giant said it was able to cut its prices by thinning out its distribution structure, among other reasons.

Usually, Chinese cabbages are sent from farms to stores via a complex web of intermediaries such as collectors from farms, wholesale markets, secondary wholesalers and retailers, all of which make up 70 percent of the final retail price, it said.

E-Mart reduced this to a two-step process by relying on its own agricultural and marine products distribution center, it added.

To counter E-Mart’s aggressive sales event, Lotte Mart is also putting its Chinese cabbage products at the same price. It has secured 20,000 heads of cabbage and is taking pre-orders from today until Saturday. Purchases will be limited to nine heads of cabbage per person.

During the same period, it will also accept pre-orders for red peppers, also used for making kimchi. A three-kilogram (6.6-pound) bag of red peppers will be sold for 48,000 won, 20 percent cheaper than the regular retail price, it said.

Homeplus will directly sell cabbage at its Internet mall from today until Dec. 5 at 1,650 won per head, it said, marking a drop of 47 percent from the average retail price. It has 1.2 million heads of cabbage at its disposal, all cultivated in Seosan and Asan, South Chungcheong. It said it cut shipping costs by 40 percent. However, its prices are still 450 won higher than at its two rivals.

“When customers of the other two discount stores get their cabbages at the end of the month, the promotion will be less relevant anyway because prices naturally drop at that time due to over supply,” said Koo Do-yeon, a spokesperson for Homeplus.

“That’s why we’re running our sale much earlier.”