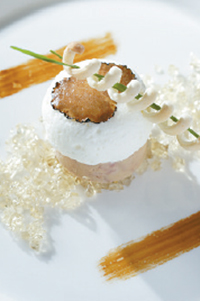 To Nov. 30: Seasons, the hotel’s French restaurant, is offering a truffles promotion.

The special dinner menu includes a range of dishes based on the mushroom, including sauteed goose liver, crisp potato salad in truffle vinaigrette and beef consomme with truffle and vegetable baked in puff pastry.

Nov. 22: The Buffet Restaurant is celebrating Thanksgiving with a buffet that includes roast turkey, raspberry salads and turkey burgers. Guests also get a glass of wine.

The Atrium Cafe will present a menu of roast turkey with California and Australian wines.

One of the wines, “Montepulciano d’Abruzzo 2010” from the eco-friendly brand “Cantina Zaccagnini,” has a vanilla and strawberry scent and “Il Bianco di Ciccio 2010” encompasses an aroma of lime, banana and orange.

To Dec. 31: The hotel has prepared three Festive Season Gathering menus for those who are planning parties around the holidays. The menus consist of seven-course meals for 10 or more. Prices start at 70,000 won, excluding tax and service charge.

Ongoing: The Cafe is offering a special savings promotion for the ladies. Groups of four or more enjoying The Cafe’s lunch buffet from Monday to Friday will be offered a 25 percent discount per table. The restaurant includes various food corners including the organic salad bar, Korean food corner, and the Japanese shabu-shabu corner. The buffet is priced at 55,000 won per person, excluding tax and service charge.

The hotel’s private resident villas that opened in 1963 have been rebuilt and reopened last month.

One of its two-floor villas, “Pearl,” was inspired by the cozy atmosphere set in the movie “Roman Holiday.” “Crystal,” the extended single-floor villa, has been specially designed for business travelers.

All villas offer a view of the Han River and Mount Acha.

Hilton Worldwide announced the opening on Monday of the Conrad Seoul in Yeouido, western Seoul. The the five-star hotel will have 434 rooms.

Based on a smart luxury concept, the Conrad Seoul will implement Smart In-room Multimedia Technology offering an all-in-one multimedia hub and a Mac computer.

* Event information is culled from the hotels.