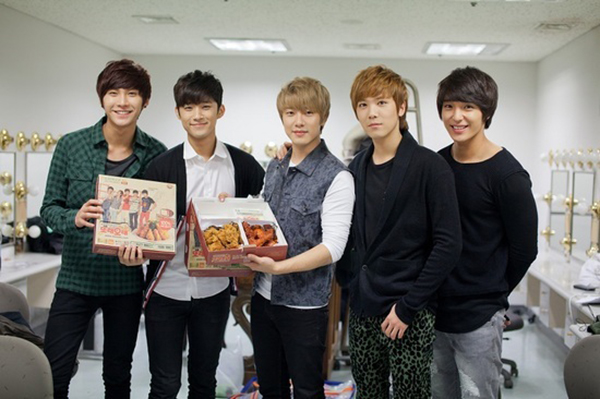 
To cheer on fans who are taking the College Scholastic Ability test today, FT Island treated some lucky student fans to fried chicken.

The five-member boy band selected a school from many that applied to receive about 100 chickens from a local chain which the group models for.

From a month ago, the band began advertising the promotion on its official Web site, and entrants had to explain why they should win.

A girls high school was picked, and a total of six senior classes were treated to chicken.

Ahead of the delivery, the boys posed with the boxes of chicken.

Meanwhile, the students returned the favor by uploading pictures of them with the snacks.

“We just wanted to do our part for the students who are studying so hard for the test,” the band said.

“Our fans are always shouting us freebies, so it was about time we returned the favor.

All the best to those sitting the test!” the band tweeted in a message of cheer to all.
By Carla Sunwoo